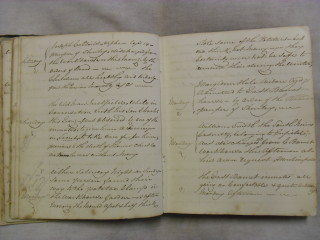 Saturday Shenley, Saturday. The Medical Officer has ordered Matron to let the Child Selisia Holloway have as much Mutton as she can eat. All the other inmates in good general health. The girl Newby is as much trouble to keep clean as an infant. All orderly.

Wednesday Since the death of Widow Cox, one of her daughters has made several applications to the Matron of East Barnet house for a shawl belonging to the old woman which of course could not be given to her without orders from the board. She scarcely even sent to make enquiry after her health during her lifetime. Petition allowed.

Friday After Breakfast this morning Joseph Mitchell and William Green went to East Barnet house as per orders.

Friday East Barnet Medical Officer recommends Chocolate instead of Tea, to be given to the Woman Burton.

Friday C.Barnet Medical Officer recommends Milk instead of Tea to be given to Thomas Stubbington.

Friday In consequence of Richard Schofield’s filthy habits for several nights I was obliged this morning to make use of the Birch Rod.

Saturday, Chipping Barnet About 12 o’clock this forenoon I went out to see if the fires where going on right at the New Workhouse, on my return in about ½ an hour I learnt that Laura Cooper & Mary Pedley two of the inmates had been quarrelling about a ball of cotton. After striking each other, the Matron separated them, when Laura ran out of the house without bonnet or shawl. About 4 o’clock Pye the Police man with some difficulty brought her back to the Workhouse. I locked her in one of the Casualty rooms, the windows of which she threatened to brake. The fear of the straight waistcoat I believe was the thing which prevented her doing mischief. We find it necessary to use the strictest Regulations with these two paupers to prevent frequent disturbances form their passionate tempers.

Monday, East Barnet The Woman Burton whoes sinking very fast, begs the Board will be pleased to let her have a full pint of Brandy weekly as recommended by the Medical Officer, it being the only thing she can keep in her Stomach. It appears the quantity sent from Mrs Bowers+ as been little more than ½ a pint a week for which she charges 3/-.

+ George Bower was a wine merchant of Chipping Barnet.

Friday Sarah Waterton, pauper of C Barnet, having herd that Mrs Acason# was in want of a steady servant Girl, was desirous to go upon trial. She gave the Matron the usual Notice & was discharged from Shenley Workhouse on Friday. She begs she may be allowed her 2 Union shifts & 2 Aprons.

# Mrs Acason was the wife of William Acason, the Relieving Officer of the Barnet Union.

Saturday Thomas Cooper having been cured of his filthy complaint, we gave him some clothing left by some of the deceased paupers & burnt all his old rags.

Tuesday Thomas Cooper being in a fit state talks of going out of the house on Thursday next. We have clothed him from head to toe. He wishes to return the board thanks. C Barnet.

Friday, East Barnet. Mary Cooper, a Giddy Girl about 20, having neither home nor situation to go to, talks of going out of the Workhouse. Wats to be done?

Saturday, Shenley. I called Mrs Tibbot this morning about the girl Godfrey, whom I expected was to be discharged according to Mrs Tibbot’s own arrangement, but it appears the Girl as gone on much better this last week and her Mistress wishes to keep her till we remove the Shenley paupers to the New House.

Sunday, C.Barnet. Jane Carpenter one of the inmates asked permission to go to Whetstone to see her Daughter, who was ill, this afternoon. She was back in 3 hours.

C.Barnet, Monday The boy Lennon who was admitted in Chipping Barnet house in consequence of Lameness, being recovered, Mr Clayton’s Gravel Diggers called this evening to say they would give him employment at 4/- per week out of which the boy says he will have 1/- a week to pay his Lodgings & begs for a little assistance for that purpose as he is not safe to be at home with his Father & Mother.