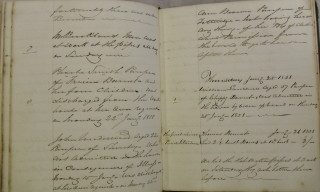 Saturday Eliza Trott, Pauper of Elstree, was delivered of a Male infant in the workhouse on Saturday 5 August about 6 o’clock evening, both of which are doing well.

Saturday The woman Bonnet returned to the Workhouse about 7 o’clock on Saturday evening as per order of board and asked a favour, If she might go out with her family on Sunday as her Brother would convey her & children to London free of expense. Permission was given.

Sunday William Davison called at the Workhouse to see his wife about 5 o’clock on Sunday evening and remained with her till 7, in the Presence of the Porter.

Tuesday The Rev Thomas Blundell & friends called to View the Workhouse on tuesday , & was much pleased with the arrangement. Order Rev Mr Lendon.

Tuesday The men who bring the Coals from London beg they may be allowed a pint of Beer each. I gave them 6d the last time out of my pocket, but nothing this time. May I give them 6d in future?

Wednesday Robert Briers, though not able for hard work, I think may be useful in the boys School. If so may he be allowed a pint of Beer daily same as those who work on the ground?

Monday            Medical Officer recommends 1 Pint of Beer daily to be given to the Woman Trott for 3 weeks from this date August 14.

Tuesday            William Davison on application at the Workhouse on Tuesday evening was permitted to see his wife as per orders.

Thursday          Ann Gillman aged 71, pauper of C Barnet, was discharged from the Workhouse at her own request in thursday 17 August. A discontented woman.

Thursday          The Woman Davison, after the board on thursday, begged very hard that I would let her go out for ½ an hour only to see her husband & she would be sure to return, but I of course could not consent.

Friday   William Warren, Casualty Pauper from Finchley, who has been very uneasy for some days because he was not discharged, saying he did not want to be Passed Home, that his parish would pay his expenses without left his bed in the middle of thursday  night saying he was going to the Privy, & made his escape over the wall by means of a Piece of rope fastened to a Log of wood.

Saturday           Some Persons got into the Workhouse Garden between friday  night  and Saturday morning & Pulled up a quantity of the earliest Potatoes nearest the Porters Lodge.

Tuesday            The Man Davison who called to see his wife on Sunday came again on tuesday, & when told it was contrary to the orders of the board said he would not go away till he had seen her & swore he would take her away in Spite of all the house for two pins & leave the family.

Friday  The Wesleyan Minister from Whetstone & a shoe maker from East Barnet called at the house on Friday afternoon to see the Man Grubb & wished him to retire to prayers, but he said he was quite satisfied with the house Chaplin.

Tuesday            The Woman Davison who goes out of the house on Wednesday the 6 September wants permission to taker her 2 Children to Church on Sunday next to have them Christened.

Wednesday      The Medical Officer recommends 2 Glasses of Gin to be given Daily to the man Constable instead of the wine, he having the Dropsy.

Friday   Mr Hall the Commissioner from Totteridge & a lady called on friday afternoon & went all over the Premises.  Quite Satisfied.

Saturday           In Consequence of the enclosed Note from Mr Hawkes of Potter’s Bar, I permitted the boy Frederick Woodhouse to go after the Situation on Saturday morning.  He did not suite.

Monday            The Woman Davison with 2 of her Children was discharged from the Workhouse on Sunday 3rd September having previously (Said) to the Relieving Officer that I had received no orders from the board to that effect, and that Sunday was a day forbidden for paupers’ discharge.  Said he knew that such was the arrangement by the board on Thursday &that the twins were to be left behind.

Monday           Five Gentlemen from the Malden Union applied at the Workhouse for admission to view the Premises on Monday Morning & was much pleased.