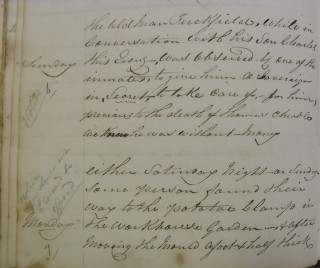 Thursday Mr Benjamin Clayton has just sent word he has a woman servant coming on Monday and that he will have no further occasion for Elizabeth Williams after that day. The Girl was sent from the Workhouse by order of the board on the 4th may.

Thursday Ann Gray, Pauper of Ridge, who was sent from east barnet Workhouse to the London Hospital by order of the board on tuesday 4 March, was discharged on tuesday the 30 may for the same cause as she was discharged from the Lock hospital sometime ago, namely not willing to submitt to the operation. Admitted in the house 1 June by order Relieving Officer9 o’clock evening. Placed with the woman Seagrave. As usual sold her flannel Petticoat & 2 Shifts given by the Union.

Friday Wanted some Children’s School books, testaments & Prayer books for the use of the Workhouse.

Friday The Rev Mr Thackery! & friends Mr Robarts & Daughters, called to view the house on friday afternoon, quite satisfied. Miss Robarts wished to know if there would be any objection if she sent the Children some books.

Saturday Eliza Trott, aged 18, Pauper from Elstree, was admitted in the house by an order of removal dated 9th May on Saturday the 3 June. The Medical Officer pronounced her to be in an forward state of pregnancy. This Girl whose within two Months of her confinement as not reached 18 years, & brought up to the Methodist Chapel.

Sunday Charles Watson to whom the board gave an order of admission in the Workhouse on Thursday, applied for admission for himself only, on Sunday, but I refused he not having his wife with him according to the order.

Friday Susannah Jiltro, widow belonging to Shenley was discharged from the Workhouse at her own request on friday 9 June, going to her daughter in London. Begged she might take one of her Union Handkerchiefs, not having one of her own.

Friday Elizabeth Williams called at the Workhouse to say she should leave Mr Benjamin Clayton on Monday 7 was going to London after a situation, but I desired her by all means, not to go, till I had made enquiry when and with whom she was going to live. She’s not more than 15 years of age.

Monday John brand & Charles Godfrey was punished this Morning, the one for taking some lead out of the house & selling to Mr Bennett for 1d, the other for wetting the bed 5 nights.

Tuesday Elizabeth Williams, South Mimms orphan aged 15, having been recommended to a Situation in London by a Lady Name Page, I thought it my duty for the satisfact of the board to make some enquiry, when & with whom she was going to live, before she went. On the receipt of the enclosed & the address of the Mistress in whose Service she is going, I gave her Permission to go up the following day, Wednesday, with proper advice.

Wednesday The Woman Davison is quite able to come down Stairs, but there wants a cradle for the Children in the day time.

Wednesday The Girl from Elstree whoes in the family way has not a Single thing for the use of the Child. Had we better have some Linen mad in the house?

Friday A person called at the Workhouse this Afternoon to see the Woman Davison, & wished me let her take the 2 children out for an hour but I objected.

Monday Admitted in the Workhouse about 8 o’clock this morning an Irish Casualty Woman & her infant who was delivered few hours before in a Ditch at East Barnet. I sent immediately for the Medical Officer who promptly attended. They are both in a fair way of doing well. She had nothing for the child to wear.

Monday Please let the children have some books. The enclosed Letter was given to the Porter at the Gate, on Sunday afternoon to be delivered to me by the woman Camel on her return from Church.

This is the woman who went out from Shenley Workhouse sometime ago & was sent back in the Cart the following day with a not saying she was an Irish & a Cripple & not able to provide for herself.

Tuesday I desired Neben Enever & several of the other men who have frequently more Bread than they can eat themselves not to waste it but to give it to some of the Boys in the house which they did.

George Farmer, South Mimms pauper, wishes to go out tomorrow If the Board will be pleased to give him a few shillings.

Wednesday    Neben Enever, Pauper of Shenley, begs the board will be pleased to grant him leave of absence for 2 Days.