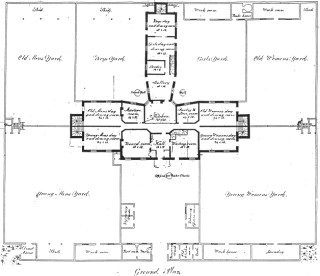 Friday   Colonel Deny & Friends from Hadley went over the house on friday & was quite Satisfied with all they saw.

Wednesday     Mr Beattie the Plaisterer is of the opinion the Drain landing to the Well should be bricked & Plaistered before it will be Complete.

The Medical Officer recommends three instead of two Glasses of Gin to be given daily to the Man Constable.

Laura Cooper having positively refused to scour one of the Women’s Sleeping Wards on friday without any cause, we kept her without her Dinner & tea.

Monday            The Boy Woodhouse, by Mr Hills request, has gone to his house for a few days upon trial.  If he suits, he will want some clothing having none but the Unions.

The Girl Williams, Pauper of South Mimms, who left Mrs Benjamin Clayton on the 13 June & went to London to Live with a Lady in Warwick Lane, having left her situation on Monday 25, was admitted in the Workhouse the same Evening, subject to approbation of the board, she being an orphan.

The Medical Officer attended at the Workhouse on tuesday 26 & Vaccinated all the young Children except the infant Trott whoes Mother objected.

The Rev Mr Woods’ Lady attended the Workhouse on tuesday & observed the Children improved in their reading.  We want some School Books.