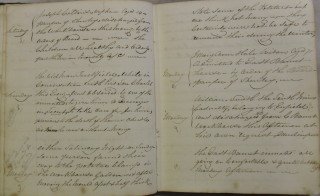 Sophie Anderson aged 28 and her 6 Children was admitted in the house by order of the board on Thursday 7th December. They were in the most miserable condition. Emily aged 11, John 9, George 4, Charles 3, Caroline 2, Henry 1. William the Father did not come with them. Paupers of Hadley.

The Medical Officer recommends 1 Pint of Beer daily to be given to Elizabeth Sell, pauper of East Barnet.

Michael Carney aged 6, Pauper of Finchley, is removed to the Sick Ward, he having the Smallpox.

Eliza Wilding aged 10 years, who has been Ill some time, Died about 6 o’clock on Tuesday evening 12 December. Let her Mother know the following morning.

Esther Sygrave aged 20, Pauper of chipping Barnet, was admitted in the house on Thursday 14 December by order Relieving Officer. Sent for the Medical Officer the following morning.

Mr Hewitt, master of St Andrews Holborn Workhouse, called to look over the Barnet house on Saturday. Said he never saw any workhouse before he was so much pleased with.

The Man Anderson asked permission on Monday afternoon to go out for ½ an hour to see his Sister who was dying. Leave granted. Returned in time.

Elizabeth Williams asked if he might go out to spend a few hours with her Sister on Sunday afternoon, but I objected.

The Pump in the back Kitchen wants a new Sucker . Shall we apply to Mr Cooper?

Elizabeth Mariah Fulade aged 7, C Barnet Casualty, was discharged on Wednesday 20th December by order Relieving Officer for the Purpose of being removed to her proper Settlement.

Received on Monday 25 December a New Bible & Prayer book for the Chaplin.

The inmates had all plenty of Roast Beef & Plum Pudding on Christmas Day & was very comfortable except the Cook who got intoxicated soon after Dinner. We sent her to Bed.

Elizabeth Williams went out on Tuesday to see her sister, as per order of the board.

Edward Hull asked Permission on Wednesday afternoon to go out for 2 hours to see his Mother who lies dangerously ill. Leave granted.

Mr Lawrence of Hadley called at the Workhouse on Saturday afternoon to say he had some work for William Anderson, one of the inmates, and wished to known what weekly allowance it would be necessary for him to pay for the Maintenance of his wife & family till he had an opportunity of taking them out of the house.