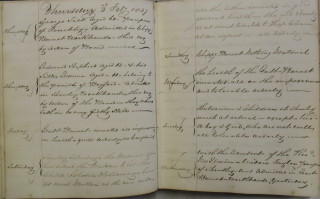 Friday  East Barnet.   Medical officer has ordered Ann Gray to apply Mustard & flour to her Legs & Knees.   The woman Burton not so well.  The other inmate much as usual.

Sunday    Fanny Starkins in company with other inmates left C Barnet Workhouse this morning for church at the usual hour, whom I saw seated in her proper place five minutes before 11, & having missed her on her return home, I learnt from the other women that she went out of the Church during prayers under the pretence of having a belly ache, and has not returned.  The officers from St. Albans brought her home the last time she was absent with 12/- expenses.

Monday East Barnet.  Mr Elwin gave directions this afternoon for the Woman Carpenter to be removed on Wednesday morning to C Barnet house in consequence of Fanny Starkins being absent without leave.  The woman Burton much the same.

Tuesday  In the event of the woman Starkins be sent home or applying to the workhouse for readmission, please give me instructions as to her treatment until Board day.  To admit her & bring her up to the next Board.

Wednesday, C.Barnet     At ¼ before 11 o’clock this morning we was obliged to send to the Butchers for the Legs & Shin of Beef for the Soup which should have been in the copper by ½ past 9, this frequently happens.

Sunday  Thomas Bourne, pauper of Hadley, did not return from Church this afternoon till 7 o’clock.  He certainly had had a little beer but being his first offense since his first admission, & having acknowledged his transgression went quiet & orderly to Bed, consequently I did not punish him.

Monday  A Stranger called at the Workhouse this afternoon & wished to see Nathaniel Poulton one of the imates.  It appears that while Poulton was in the Service of Mrs Hillman at the Black Horse sometime ago he placed some earthenware under his care which he afterwards sold and made use of the money.

Wednesday   The Clamp of Potatoes & the Savoy Cabbages in the Workhouse Garden was again visited on Tuesday night or Wednesday morning & a quantity of each taken away, this is the second time.

Thursday       William Tuckfield wishes to attend his daughter’s funeral at East Barnet tomorrow.  Is he to have permission?       Allowed.

A woman of the name of Bumby, Sister to the deceased Mary Tuckfield has made application to the Matron of East Barnet house to have her Sister’s Clothes.  Value about 10/- to 12/-.  This question to stand over.

Friday     Pye the officer came with a horse & cart to the Workhouse this morning & took Fanny Starkins to St Albans Gaol, as per order of Magistrates.

Wednesday  East Barnet Medical Officer has taken off the wine & ordered Beer to be given to some of the Sick.