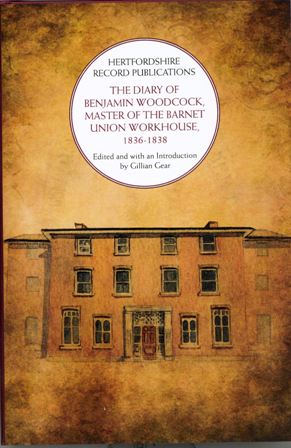 To listen to the audio clip, click play on the bar above the image on the right.

Margaret Galloway, Mother of Susannah Galloway aged 5 years, now in the house, called on Monday & wished to take the Child out, when I wished her to apply to the board on thursday which she said she would do.

Mr Samuels, Farmer of Potters Bar, wants a servant Girl. His daughter called at the Workhouse on Monday & saw Martha Fox & said she would attend the board on thursday about her.

Its quite evident the privys in the Mens Yards drains itself into the well, te soil having sunk upwards of 2 inches after the man had been pumping a few hours.

Mr Wager* the Carpenter has taken down the Great Bell, it being entirely useless.

If one of the outhouses in the Girls’ or women’s yards had a Fire Place, we should find it very useful in such cases as the Smith family. They are now obliged to be in the house.

William Smith, his wife Hannah and their five Children was discharged from the Workhouse at their own request on thursday 23 November.

Mr Wright, 10 Giltspur Street, made application to the house on friday for a healthy young woman as Wet Nurse. See the enclosed letter.

Eliza Trott went up to London early on Monday Morning after the situation as Wet Nurse, but the Lady had engaged with a person on Saturday. She paid her expenses.

Daniel Connel aged 45, Casualty pauper from South Mimms, was admitted in the house on consequence of Illness on Thursday 30 November, order Medical Officer. This man belongs to Hulbeach, Lincolnshire, he was going to work on the Western Rail Road. He dropped Mimms side (of) Barnet

Henry James aged 30, Pauper of Shenley, was admitted in the house by order of board on thursday 30 November. The next Morning he asked to go home to fetch some things, but I of course refused.

Mrs Baker of the Swan Inn, Finchley, having made application at the workhouse for a Servant Girl, I called on Saturday and ascertained we had not one in the house likely to suit.

Francis Young from Hadley called at the Workhouse on Monday to see Eliza Trott and Persuaded her to go out of the house. The following morning Eliza Trott gave the usual Notice and was discharged. Eliza Trott went out.

4 Gentlemen Guardians of the Amersham Union went entirely over the house on Wednesday and was much Satisfied. Received from Mr Bowers on Wednesday 6 December, 1 dozen Wine.

* John Wager was a carpenter and undertaker of Chipping Barnet.