LETTER FROM WILLIAM BAKER TO HIS WIFE, SOPHIA 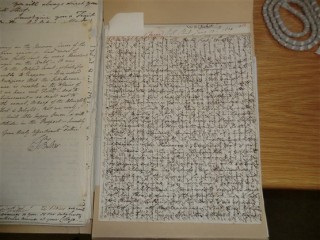 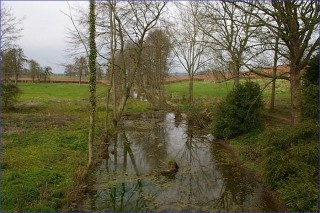 William Baker owned a substantial farm, ‘The Hazle’, which was tenanted by a Mr. Barnett. He is paying a cordial visit to the Barnetts to inspect his property.

I trust you received the short note which I left you this morning with its enclosure. It was written before I had heard distinctly how our dear Charlotte has passed the night, and I was sorry to learn afterwards from E. Oakley that the former part of it had been much disturbed by the cough – the latter much less. I may hope to receive a line from you here by five tomorrow afternoon if you write by the ‘down post’ this evening. In like manner, if you write tomorrow I may receive your letter here on Monday. This which I am writing will leave Ledbury at seven in the morning in the post. it seems going out from thence always at that hour either to Bristol via Gloucester, or straight to London.

I am indeed truly anxious to know how our dear girl has been through the several parts of the night, what Barry says about the waters, and in what any part of the symptoms have varied from those of any former days. Add an account of dear Sophia and of your valuable self the nurse and stay and comfort of us all. I am greatly indebted to whoever has lately provided a greatcoat at house and for having spared it to me. E Oakley was in waiting with it for me in the passage as I stepped into the carriage. Pray thank the dear girls for this kind and comfortable mark of the rembrance, I found it indeed of the greatest use to me during my journey on this bitter day, but I should grieve to have had even this advantage to their prejudice. It shall be returned to them faithfully on my return.

A few words about my journey. After a comfortable breakfast which James had with great dililgence and affection prepared for me, I was off 7 minutes after 7 and reached Gloucester at 20 minutes past one. The coachman having given the horses some hay and water at Newport. Cramped with sitting in the chaise, i walked on for near 3 miles and the carriage overtook me – the promenade having done memuch good – What little snow fell was kept off by my umbrella. It was very trifling though, before I had finished my day’s journey, the distant hillseen from Ledbury appeared white, in particular exposure to the East.

Since I have been here the snow has increased much more and I fear, should the wind continue in the East, the appearance in the morning will be dreadful – very much to my hindrance in getting out as I wish tomorrow and Monday.

I harrived here at half past three and,as dinner had not been ordered ’til five and the snow then had not begun in any inconvenient degree, I was tempted to take a walk of an hour to a mill near the Hazle, which I have repaired since I was there last, and along the side of the new navigagtion – a work wich I fear will never answer. It was intended to be carried from Gloucester to Ledbury and thence to Hereford. The Former part is not quite finished, and the latter probably never will be. the projectors will be much disappointed, of which Andrew Foley I can remember was one – Mr. Skipps and I opposed it – but it was carried against us. Sir G Cornwall and others were made the tools of a lot of schemes to force it down – and the result has been much such as I have described.

Mr. and the two Miss Barnetts were much disappointed in not seeing the young lady, who would have been  very kindly and hospitably received. We had a PARTIE QUARREE over and excellent dinner, consisting of a very nice boiled chicken with an excellent additionof something between very good bacon and a very good pig’s face, greens and potatoes of a capitol sort and very well dressed, a small saddle of Ryeland mutton, as fine as could be served up, finished our first course.

Our second consisted of two well sized tarts or pyes and bread pudding. the latter looked very nice, one of the former made with a verfy good crust, currants and raspberries (a mixture you know. not to my mind , but in this instance forming an ensemble perfectly excellent in its way) the contents. What the other contained I know not – but it looked as nice as its fellow which was devoured heartily. Cheese made at the farmfinished the repast with very fair port wine and the best golden pippin cyder  apples as a dessert and tea since in very good clear order, have brought me down to the moment when I am writing.

The room in which I am sitting is about 27 feet long by about 13 wide – wainscoted to the top in old-fashioned panels – a high stone pediment chimney piece which heretofore was layed open for burning wood, but when the room was fitted up about 20 years ago, and the wainscot and stone work of the chimney painted, was contracted to a sizeable opening, the chimney drawing well and with a marble slab and cheeks from a pit the in the neighborhood makes a very good appearance  and in this congenial weather , a very comfortable point of attraction, with the assistance of good coal from the Forest of Dean. A large window at the side of the room gives sufficient light and the arms of Mr. Touson’s predecessors over the chimney carved in stone and properly emblazoned adds to the antique ornament of the whole. A glass doorindeed in the daytime adds to the light of the room. It is at the end of the fire place and leads down 5 steps into the garden, in which Mr. Barnett appears to take great pleasure.

Among other things where are two very beautiful cypresses, raised by himself from seed since I was here last, and now 18 or 20 feet high, which he has managed with great judgement. His apricots are in full bloom and I fear will suffer. the room is not in proportion but very comfortable – not more than 10 feet high with an excellent oak floor.

Adieu. It is now near eleven.