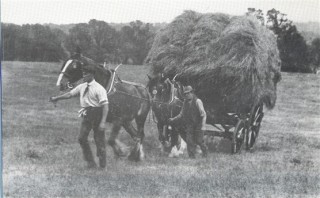 June 7th Inned 2 little pcells of hay (being togeather 1 jog*) out of the walnutt tree pightel+ after much more had bin carryed out to the horses to eat in grass.

28 Brought home the sinck foyle out of Long Close   So brought in out of the Parck, the horserace, and the hedge greens of the wheat season etc in all   30 loads

* A Jogg was a small cart load of hay

+ Pightle is a Hertfordshire word for a small field.