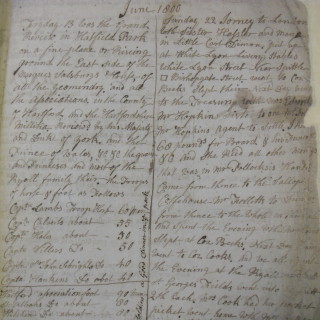 -And the middle thereof the Moat, which was finished & cleared the 18th instant

There were this year very few apples or pears at Rothampsted none, no quinces, few peaches no Apricotts, few Nectrines, few hopps, plenty of grapes

The 27th of this instant made (of 16 botts of Apples I brought) a Pearce+ of Cider: & beat my grapes; of which tunned-

22 Some rain in the morning, after a very clear day W:almostN

* Anker: A liquid measure of about 10 gallons, used for wine, cider and spirits.

+ Pearce: Sir John refers to a pearce of cider, but may have meant a terace, being 42 gallons of cider