The Letters of Arthur Martin-Leake April 1917 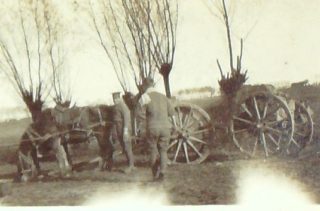 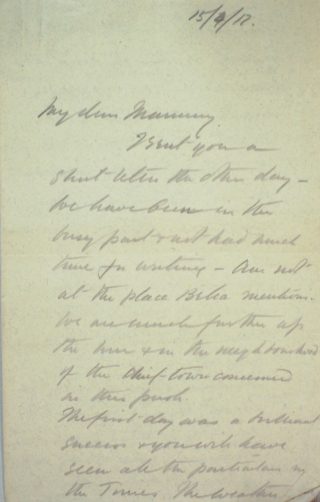 We hear today that America is really going to have war; but up to present the papers have not come so we don’t know any particulars. There is also some news about that another Hospital ship has been sunk.

I sent you a short letter the other day — We have been in the busy part & not had much time for writing — Am not at the place Bella mentions. We are much further up the line & in the neighbourhood of the chief town concerned in this push.*

The first day was a brilliant success & you will have seen all the particulars in the Times. The weather became desperately bad, but in spite of this the front has been pushed on & progress made. It is a pity the weather got so bad & made the country almost impossible for any movement. We don’t seem to get much luck with the weather, but it is probably because it is so chronically bad in this country & we notice it more during attacks.

We had large numbers of Bosh through & a good number of them wounded. Fortunately two Bosh doctors were captured in these parts, so we put them on to look after their lot. This saved one of our own people when we were busy & was most convenient. Their losses on the first day were very heavy & they admit this in the papers.

My old C.C.S. must have been pretty busy, as they would come in for the Vimy cases. It is most satisfactory to hear that we have taken Vimy. I was in those parts for a whole year.

We have practically no signs of spring yet except a few snowdrops in the gardens. The weather is very cold & wet, but can’t keep on like this much longer.

The cake & chocolate are a huge success & were opened when the rush of work quieted down. Expect Sittie must be very busy in her hospitals. We have sent enough home to last her some time, though on the whole I believe the casualties have been slight for the amount gained.

Hoping you are quite fit & are taking all care of yourself.

Best love to all.

* This was Arras, and the “push” mentioned was the Battle of Arras, which included the assault on Vimy Ridge.