The Letters of Arthur Martin-Leake March 1917 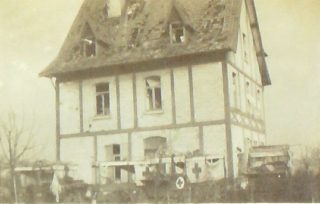 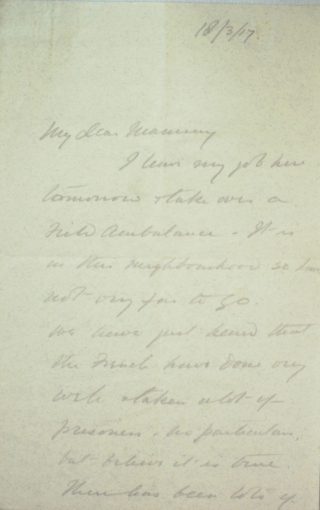 Many thanks for two letters from you.

Am very glad to heat that Bella is now pronounced to be all right & that there are no ill effects remaining. Thank her for her letter which arrived a few days ago.

We had tremendous excitement here yesterday. A Bosh flying machine was brought down close by. All turned out as well as the civilian population & the show reminded me very much of the visits to see the Zepps last Sept[emb]er, only it was on a smaller scale, fitting the bird. The Bosh was whole unfortunately & they say he was very glad to surrender.

We are in winter again & all was quite white this morning — frosts for the last three nights. It has however turned warm now & the snow is going. It is a pity it came because the country has been drying up well & more wet may interfere somewhat with your farming efforts.

The Bosh’s efforts to get Mexico on to America is grand, & has apparently wound up the Yanks pretty well. They will surely have to do something now…

I leave my job here tomorrow & take over a Field Ambulance. It is in the neighbourhood so have not very far to go.

We have just heard the French have done very well & taken a lot of prisoners. No particulars, but believe it is true. There has been lots of work here lately, & we had a big night of it last night. There was a raid which seems to have be {sic} a success. The old Bosh is said to be going back on the French front.

We got the Russian news yesterday. As far as we can understand the Revolution*, it appears to have been wanted by the army & the people & so may be a very good thing. At any rate the country seems to be determined to go on with the war…

* This was the liberal revolution — the Bolshevik revolution was later in the year.