The Letters of Arthur Martin-Leake August 1914 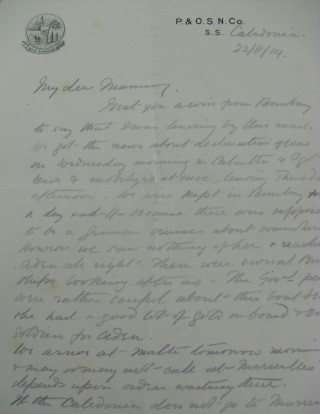 I sent you a wire from Bombay to say that I was leaving by this mail. We got the news about declaration of war on Wednesday morning in Calcutta & I got leave & mobilized at once, leaving Thursday afternoon. We were kept in Bombay for a day & a half because there was supposed to be a German cruiser about somewhere. However we saw nothing of her & reached Aden at night. There were several British ships looking after us. The Gov[ernment]al people were rather careful about this boat because she had a good load of gold on board & some soldiers for Aden.

We arrive at Malta tomorrow morning & may or may not call at Marseilles. It depends upon orders waiting there.

If the Caledonian does not go to Marseilles I am going to try & get on to some French port by any boat that may be going. We have about 10-15 French Reservists on board & they have got to get home somehow. Shipping is said to be quite safe in these parts now, & there may be boats running, though there was no chance of anything running from Port Said.

There is another Englishman with the same object in view & we are going to wander along together till we find the Expeditionary Force. He comes from the Viceroy’s staff & got special leave to join his regiment. Otherwise they are not allowing any officers to leave India. In fact all officers on leave have been recalled.

I should of course have much liked to have come home first to see you, but it is pretty well certain that if I did try & start from England I should be given some home job & should probably not get abroad at all. Perhaps I shall be sent home as it is; however in these days of uncertainty it is difficult to know what to do & how things will turn out.

We are practically without any news & only get very contradictory wires. It seems however that the Germans are having a bad time & things are not going in the least as they expected. I don’t suppose you are hearing much at home, as there seems to be very strict censoring going on.

Am of course very anxious to hear about the naval part. I wonder what Frank is doing. In a paper dated 8th? it said that the Pathfinder was chased. I have no doubt that Frank is in the thick of it & having the time of his life.

We cannot imagine in the least what England is like, but I expect you are much quieter now & are getting more or less used to the conditions of war.

It is very satisfactory to see our ports full of German boats; they won’t have many left after the war. I wonder if you have heard that the German Consul and five other Germans have been shot at Malta for setting an oil ship on fire. The story goes that they had passports & were leaving the island.

Our Frenchmen on board are most amusing & there was no holding them when they heard that their army was in Alsace. Race hatred goes a long way with the soldiers & the Kaiser could not have overestimated the feeling in France against him. It seems that the whole world will be glad to see Germany smashed. If you communicate with Frank now tell him how India is hoping to hear that the German fleet is at the bottom of the sea.

I am sure you will agree with my efforts to join the army on the continent, & forgive me for not coming home first — which of course I should certainly have done, had it not been for all the red tape & difficulties… Remember I have had experience with these people before & now want to short-circuit them if possible. I have brought my uniform & think there will not be any very great difficulties in getting across France. Also have money in gold. I expect to be attached to some hospital, or sent home as not required. I will write as often as I can & I hope you will have no anxiety about me. Remember mine is quite a peaceful job & I am not like to be exposed to any danger.

Willie must be very busy somewhere & I am much wanting to hear what he is doing. Wish Best love & hoping you are keeping quite fit & I have no doubt that I shall be home at Marshalls before very long.