The Letters of Arthur Martin-Leake December 1915 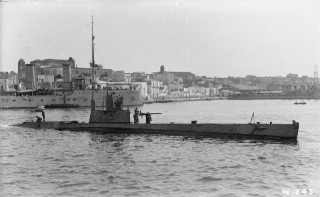 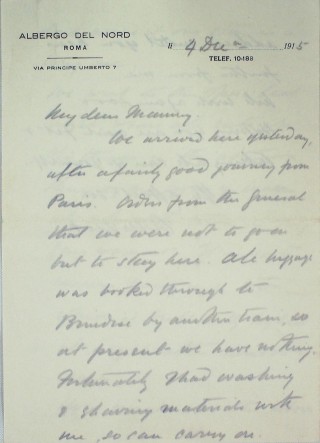 {In late November, Arthur was recalled to England and informed that he was to be sent out to the Balkans, having experienced the area in 1912. He travelled via Folkestone and Paris, eventually arriving in Rome}

We arrived here yesterday, after a fairly good journey from Paris. Orders from the General that we were not to go on but to stay here. All luggage was booked through to Brindisi by another train, so at present we have nothing. Fortunately I had washing & shaving materials with me, so can carry on. We may get our stuff back in a day or two.

I can’t tell you much about the future, except there is an idea that we shall remain in Rome for ten days or a fortnight.

There seem to be great difficulties in the way; in fact the whole thing is rather in the air at present.

We are of course very lucky to be held up here instead of Brindisi, & personally I don’t mind if our stay is a long one.

We went to the Opera last night & saw all sorts of old things in the afternoon. There is no sign of war at all & the town is very gay & smart. It is rather curious being in a town which is brilliantly lighted at night after London & Ware.

You might use the above address until you hear further from me.

Hoping you are quite fit & taking great care of yourself.

I told you in my last letter we were most likely coming home. This now seems to be postponed & we remain here. As far as we can see this looks like some political business now. They keep saying in the house that the Serbians are to be (or are being) fed & clothed by the English & Italians, so we are kept here to look as if something is being done  & to enable our beautiful gov{ernme]nt people to give their usual evasive answers. The Italians, for their own reasons, don’t want us over there & have put all difficulties in the way. At present it looks very much as if it is going to suck in smoke, or at any rate become merely a question of shipping supplies over for the people there to distribute. It is not advisable to say too much in a letter so I will close on the subject…

I have written from here but don’t know if you will receive any letters*. So this is another attempt. Came here four days ago & am waiting for something to happen. Nobody knows anything, & it does not look as if anything can be done. At any rate I know nothing.

I hope you are quite fit & best wishes to all for the New Year.

* Arthur appears to have sent a number of letters from Brindisi around this date, but only two are found in the family files.