The Letters of Arthur Martin-Leake February 1916 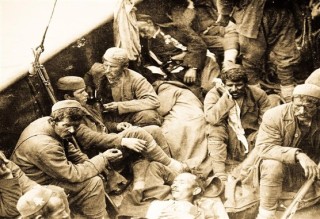 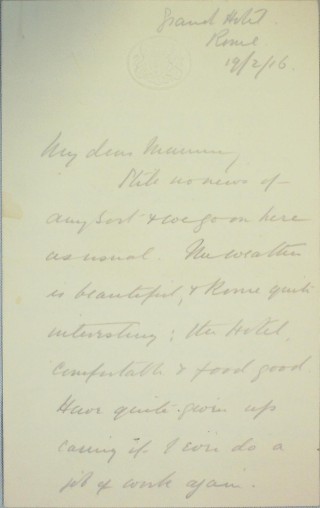 Returned to Rome this morning from Corfu. We had a very interesting trip & were in the Island about 5 days.

The Servians [Serbians] are arriving at the rate of 4 to 5,000 per diem, so the whole army will soon be moved.

The French are in possession of the Island & are putting themselves in sole charge of the Servian army. We went, as far as I can understand, to try & get a finger into the pie. The situation is most involved & I don’t think anybody here knows quite what will happen.

The medical arrangements are very inadequate, & not much is being done for the sick Serbs. They all look pretty bad, & the French doctor in charge says that about half are sick. They die at the rate of 100 per diem.

I believe I shall be coming home in a few days, but all changes so quickly in this show that we don’t know what to expect.

A letter from you today, dated Jan 26th. What a state of excitement High X must be in over the change of parson. It will be a good thing to get Mrs O out of the place. Have not received yours stating that Mrs Wetherall is dead.

Hoping to see you soon.

Still no news of any sort & we go on here as usual. The weather is beautiful, & Rome quite interesting: the Hotel comfortable & food good. Have quite given up caring if I ever do a job of work again.

Have you read Gibson Bowles’ speech in the Times the other day. It looks as if the country won’t stand the present lot in power much longer. They couldn’t be doing much more for Germany if they were in her pay. Perhaps they are?!

Received yours of the 8th yesterday. If you will address letters to the Grand Hotel, Rome, they will get here in half the time.

You say you think from what the papers give that we must be very busy out here! Did you ever get a cutting from the Times which I sent you. It represented this mission as being the only busy organisation in Europe just now. As a matter of fact the mission is only being allowed to exist at all, by the kindness of the French, because its wails & lamentations on the shore of Corfu were so piteous when it thought it would have to go home.

I don’t quite follow what happened to the Plum Pudding. Was it returned from Italy?

Best love & hoping you are all well.