The Letters of Arthur Martin-Leake March 1916 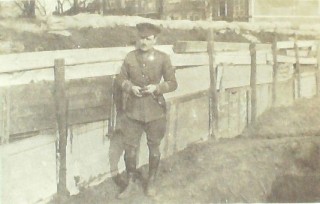 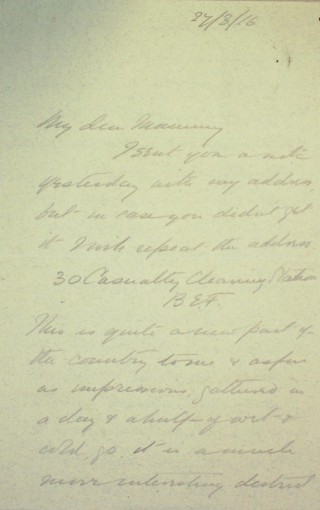 {Arthur returned to England from Italy in early March, and stayed at Marshalls for the majority of the month. On the 22nd, he headed back to France}

I sent you a note yesterday with my address, but in case you didn’t get it I will repeat the address.

This is quite a new part of the country to me & as far as impressions, gathered in a day & a half of wet & cold, go, it is a much more interesting district than any I have been in so far.

A Casualty Cleaning Station is of course quite a new experience & I don’t understand much about the working of it yet. This one has only been here a week & is not yet established in its permanent quarters, consequently we are in rather a muddle. The permanent place is a French hutted hospital & the French have only recently left it. The huts are very good & everything is substantial & well done except the choice of the site & the sanitary arrangements. The site is bad because it is a wet & low lying bit of ground. The sanitary arrangements are characteristic of the country, but our people are already onto them.

There will be a good deal of work here as the wounded & sick of three divisions came this way. A Casualty Cleaning Station as you probably know is the next stage from the Field Ambulance. It is situated far back from the fighting line & on a railway so that trains can come up & empty it frequently.

All serious cases are operated on & kept if necessary till they can be moved.

As far as the risks of war enter into this job, I am quite as safe as I should be at Marshalls, so you have no need to worry in any way about me.

I had rather an extraordinary time at Boulogne, meeting within a few hours three men connected with the Bengal-Nagpur. One was Old Graves. Steenie will be interested to hear this. He is for all practical purposes a General on the railway & spends his time travelling up & down. He is more of an old dodderer than ever, & one couldn’t help feeling sorry for him. A rotten job for an old man of 62. However he seems very keen & enjoys his time off in Boulogne.

The second man used to be Adjutant of the BNR Volunteers; he was on his way home for leave.

The third is a Traffic man & is working in the base railway office.

Best love & hoping you are all fit. Take care of yourself in this nasty weather.

Although Arthur remained at the CCS during the following months, the next letter in the archive is dated 16th June, so there will be no articles for April or May.