The Letters of Arthur Martin-Leake January 1915 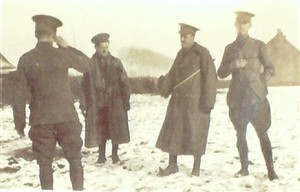 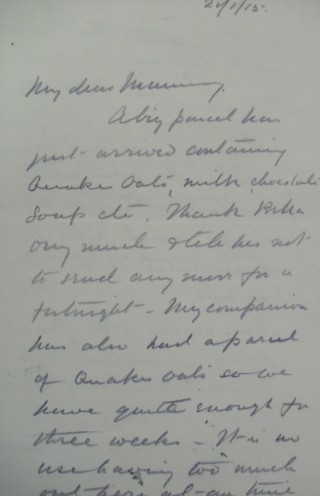 A big parcel has just arrived containing Quaker Oats, with chocolate, soup etc. Thank Bella very much & tell her not to send any more for a fortnight. My companion has also had a parcel of Quaker Oats so we have quite enough for three weeks. It is no use having too much out here at one time as it makes moving difficult.

We hear that the Turks have had another bad knock, also that their preparations for the Egyptian campaign are not going well. The army waiting for them with open arms on the canal will be disappointed if they don’t arrive.

There seems to be great political unrest in Austria Hungary & we shall probably have much good news from that part of the world when Roumania {sic} & Italy chip in.

We are living in great peace & quietness here & might just as well be at home. However there is no question of leave for this part of the army now, but it may come later on. I should like a book very much, a small selection of Dickens or Thackeray or anything else. I don’t care much what it is.

I met the M.P. the other day with the Herts. He is getting hugely fat, but probably a good deal of his largeness is due to wind which he seems very full of.

This is most uninteresting country, quite flat & full of water.

All is going well & the general news from the line is distinctly good. Still hold to my sudden collapse theory & think it will come about in the Spring.

Hoping you are quite fit again now.