The Letters of Arthur Martin-Leake September 1914 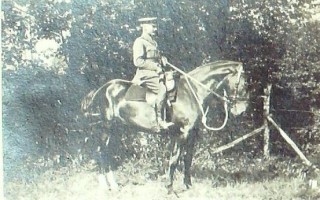 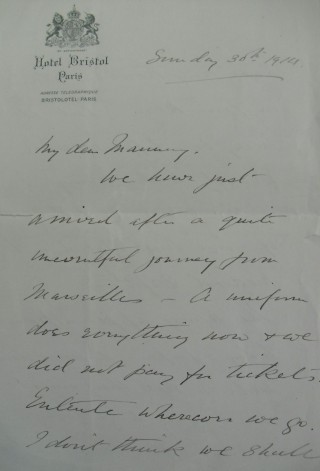 {The archive contains no letters dated September, so I’ve used a couple of letters from the very end of August. These would certainly not have arrived at Marshalls till September}

The Caledonia called at Malta & then left for England, so we disembarked there to take the first boat for France. There was some difficulty in finding a boat & we had to wait three days… as my partner Capt. Benson held a letter from the Viceroy asking that he should be helped on, everything went quite well for the first two days. They (the authorities) then began to get nasty & the officials belonging to the Governor ordered us to be detained and forwarded on to England. We heard this on the evening of the second day & the official, who’s {sic} duty it was to detain us, said he would give us till 9.30 the next morning. Fortunately that evening this boat came in on her way to Marseilles, so we went on board early next morning & remained on board all that day in the harbour & so escaped. This ship is a tramp carrying a cargo of wheat for France. She is quite a good boat of her kind & very clean & well kept. The skipper is a gentleman & taken much trouble to make us as comfortable as possible.

Our stay in Malta was quite interesting. Half the French fleet were there & we went on the Admiral’s ship to call. The Admiral gave us permission to go on any French war boat that was going to France, & of course this might have been very useful if we had not found this ship. The Fleet left the harbour in the afternoon going probably to the Adriatic. They have a tremendous lot of small craft & submarines.

There was very little war news to be obtained but as far as it went, it appears that the Germans are not making any progress & that they are having rather a bad time. This must be an awful knock to the Kaiser & I hope now we shall soon see his complete downfall. Just on arriving, we heard a rumour that our Expeditionary Force had been fighting hard with most satisfactory results. I wonder if this was so.

The Skipper expected to get to Marseilles tomorrow morning, but we are having some bad weather & shall probably not get there till afternoon. We only do about 10 knots under the most favourable conditions.

There ought not to be any great difficulty in getting across France as we have a letter from the French Consul at Malta saying that all help must be given. You won’t get this letter for some time, as the ship may be delayed at Marseilles for some days. I am sending my tin box round & it will be forwarded from whatever port the boat stops at. Hoping you are all well & that you have good news from Frank.  Best love.

My dear Mammy   We have just arrived after a quite uneventful journey from Marseilles. A uniform does everything now & we did not pay for tickets. Entente wherever we go. I don’t think we shall have any trouble getting on from here, but it may be difficult when we get to the army. I shall have to get hold of some high official in the Medical Dep[artme]nt.

The navy appears from today’s papers to have done well. How they must be longing to get the German fleet out in the open.

I will send you an address as soon as possible, & perhaps if I can’t get a job I shall be home before many days.

Hoping you are all fit & having good news.