The Letters of Arthur Martin-Leake September 1915 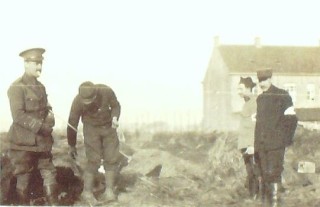 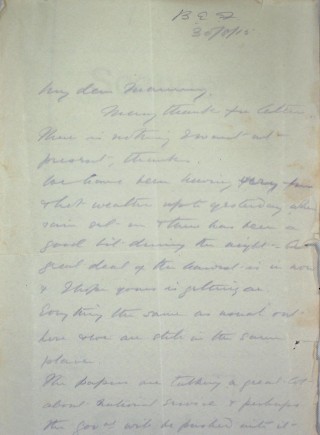 {Only one letter survives in the files for September, so I’ve added a letter Arthur wrote at the very end of August}

Many thanks for letter. There is nothing I want at present, thanks.

We have been having very fine & hot weather up to yesterday, when rain set in & there has been a good bit during the night. A great deal of the harvest is in now & I hope yours is getting on. Everything the same as usual out here & we are still in the same place.

The papers are talking a great lot about National Service & perhaps the Gov[ernme]nt will be pushed into it someday. It is difficult to make anything out of the Balkan situation but it looks as if something may happen down there before long. Germany appears to be climbing down over the American business. The Yank will think he is a great fellow after this.

Frank seems to be getting a little amusement out of the old man, & also some grouse. This is quite right & the old man should be made to do his bit for the navy.

Von Tirpitz must be very sick about the loss of his ships; he will be getting the order of the boot if he gets so venturesome.

Best love & hoping you are all quite fit.

Things just now are quiet & we seem to be reaching our normal condition again. We have been very busy & have had a lot of wounded through. You will see by the papers that something has been done, but all I can actually tell you is that there are eight German guns here. Our front has not advanced & most of the fight was done by other div[isi]ons. We of course have had wounded from other parts as all the Hospitals have been conjested. The French seem to have done very well & the total bag of provisions is large. I hear that Gen Copper* has been killed, his Div[isio]n has had heavy casualties. The Germans must have had heavy losses & have probably had a real good knock.

The Russians appear to be hammering them well, so on the whole they can’t be quite as happy as they were.I hope we are going to keep on at it, as we ought not to let them rest now if we can go on. The weather has been bad.

We are having a touch of cold now & if I don’t get home before long shall have to get you to send my warm clothing, however don’t need anything yet as I may get leave after this.

Best love & hoping you are fit.

* Unfortunately, I’ve been unable to track down any reference to a General Copper killed in 1915. Any information about this would be very gratefully received.