From: The British Embassey St Petersburg 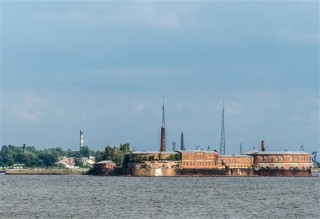 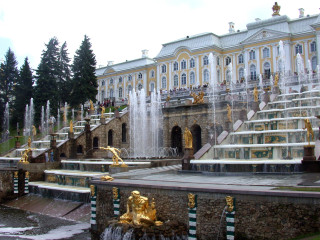 To listen to the audio clip, click play on the bar below the first image on the right.

I am having a lazy morning here, so will employ it in a good way by getting through some letters and although I only wrote to Father two days ago it was but a scrap and I know you will be interested to hear of all our doings here.

We are being feasted daily and it is quite wonderful how the Russians have laid themselves out to entertain us in every way. We arrived at Kronstadt on Monday and thanks to all the trouble they took to buoy and dredge a channel for us, we were able to get up and moor close to Kronstadt – in fact only about 200 yards from the shore and they laid special moorings down for us all, and we are secured bow and stern to buoys as there is no room for us to swing.

The day we arrived was taken up with official calls and that night the Admiral and the six Captains dined in the Minister for Marines yacht with the Minister and the Grand Duke Cyril, who I used to know when I was in The Powerful in China. After dinner we went to a reception given by the Naval Club at Kronstadt. Yesterday I came up here and am staying at the Embassy and most comfortable it is. Sir George and Lady Georgina Buchanan are very nice and there is also a very pretty daughter who is very nice. I have got lovely rooms: a big bedroom and sitting room and bathroom. Last night the British Colony entertained us at an enormous banquet, to which about 400 odd sat down, and a Ball afterwards, the whole thing being most beautifully done and we got back here about 2.30. It is now nearly 10 o’clock and I have just had my breakfast in the sitting room in my pyjamas, and am going to dress for the luncheon with the Emperor at Peterhof – which ought to be very interesting. This afternoon we go on to a garden party given by the Grand Duke and Grand Duchess Cyril at their Palace, and tonight there is a large banquet here.

I return to my ship at Kronstadt late tonight, and tomorrow we have more shows down there. On Saturday the Emperor comes down to inspect the Squadron and lunches on board the Lion and I believe comes on board my ship, and directly he leaves I am going to get under weigh and go alongside the Lion as we have got an enormous ball that night to which about 1200 have been asked, and so the New Zealand is going to be the Ball Room and the Lion the Supper Room, but it will be an awful rush to get every thing ready. Altogether, as you will realize, we are having a most awful fly round and I shan’t be sorry when Monday comes and we depart for Borkis Sound where we remain 3 days to coal before proceeding home to Portland.

It is horrid for me having no navigator and I am sorry to say Captain Jones is still pretty bad and I fear they will have to operate before we get home. Anyhow there is no chance of his being off the sick list before we arrive in England. We heard yesterday by wire that Beaty had been made a K C B, also the naval promotions were being wirelessed to us and my Commander is again left out so I presume he will give up all idea of ever getting his step and will leave the ship. I think it is hard on him, not that I have any great affection for him, because I haven’t, but he has worked hard and deserved to get it, but of course he is far from being a gentleman and shews it so much.

The Review is on 18th July at Spithead. If Father or any of the family can come down for it I shall be delighted. Much love my dearest Mother to you all. I must now make myself look nice or rather try to.

Ever your very affectionate Son