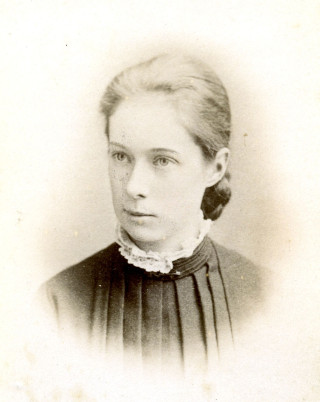 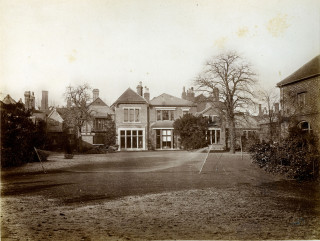 Wilhemena (Winnie) was born in 1863, the third daughter of the Hitchin Quakers Frederic and Mary Ann Seebohm. She suffered from asthma and died at the age of twenty two.  The Hertfordshire Mercury for 2 January 1886 recorded her death as follows:

“She had a great love of study and at her earnest desire was allowed to enter NewnhamCollege, Cambridge, the matriculation examination of which she passed with great distinction, with a view to qualifying herself for future usefulness.”

An account of her life has been written by Victoria Glendinning, née Seebohm, and published as “A Suppressed Cry” by Routledge & Keegan Paul, London, 1969. On her death, her family borrowed as many of her letters as they could and copied extracts from them.  Most of the letters are concerned with Winnie’s spiritual thoughts and accounts of her term at Newnham College.  These extracts relate to day-to-day matters at home, the Hermitage, in Hitchin.

The Hermitage, [The Seebohm family home in Hitchin]

My dearest Hugh [her brother]   When we arrived her everything looked lovely (of course).  The servants beaming, the lawn as green and velvety as possible, Jack [the jackdaw] in as much ill-temper as when we left – the five white pigeons asking for corn.  Lobster sitting, disconsolate by the stables – Wurra curled up by the drawing room window sleeping in differently [the cats], flower pots in the hall, none on the stairs – our room – no curtains!  I sat down on the stairs & cried with disappointment!  (I did’nt of course, but poetic license – exactly).  Durling (simpering and twiddling her huge thumbs) said that she didn’t know how it was, Miss, the man only came to measure the window the other day “  I said “Which other day?” but she “Couldn’t say Miss, it was the other day.”   However in the afternoon they were up, so the poor thing must have been wandering as usual.  They look beautiful, tho’ Mother says “she is sorry we go in for such coarse taste.”

Dearest Mother I meant to have sent in this afternoon’s packet, but had not time to get anything written before 4 o’cl.  Essie [her sister Esther] and I found so many “civic” duties to perform that we scarcely have any time for our own occupations.   …. In the schoolroom we are reading “Samson Agonistes” and my pupils enjoy it very much.  Dora reads it very well – so solemnly.  I found after much probing, that they knew two facts about him – that he carried a gate on his back , and that he pulled a house down. [Winnie had undertaken to teach Hilda [her youngest sister] and Dora Ransom]

My dear Edith [Mrs Edward Morris – in Melbourne] It was quite a new interest to me to read some Colonial news.  And just now I am reading a little about the history of the colonies, my primary object being to make geography lessons more interesting for my pupils. …. The owls are, as far as we know, alive and well.  When they were grown up & all hope of their becoming really tame seemed past, we let them out in the garden.  For some time after we heard them at night, but have not seen any  traces now for many months. …. Photographs are rather a sore point with us – for we never succeed in being decently taken.  Perhaps we are more ordinarily vain!  I will see what I can do for you before sending this off.  How I should like to jump into Australia & share the joys of spring with you! It is so cold here, we had quite a heavy fall of snow last Sunday, and tho’ it has disappeared now, yet it has left a shivering feeling behind it. … Papa has been working hard for “Proportional Representation” but now thinks that it may have a chance in the next century!  Sir Charles Dilke told us that all the Cabinet are against the scheme except Mr Gladstone, who thinks it right to give in to Lord Salisbury in that. … We are very busy getting up some acting for our servants and the men and their wives and then for a children’s party afterwards.  And as we make up the play, manufacture all the costumes, construct the stage, and act all the parts ourselves, so it  involves a good deal of time and labour. … Judy has been visiting in the North and helping with a bazaar at Darlington. After Christmas we shall have visitors and I shall be busy preparing for next term.  I shall have to get up Addison and Pope  …. We have been doing Milton all this term.  My children had not read any poetry before  I undertook them so it is very interesting introducing them to its treasure-houses.

1 April 1885,To Mr Locker-Lampson From The Hermitage, Hitchin

“How I should like to show Godfrey a lovely Robin’s nest we have in a brick arch, it has five such tender eggs & is so trustful of human kind.”

16 June 1885 To her sister, Juliet, recording a surprise visit from their brother, Hugh.

“As we were all sitting at tea under the acacia tree, a gruff & well known voice was heard coming up the drive “Hulloa, got a cup of tea for me?”   …. After tea we trooped round the garden & dell, then had some tennis – & I sped across to Mrs Dawsons for some new balls in his honour & Papa came back from the bank early to enjoy him.”

“At 3.30 we started for Lilley Hoo, with tea and work.  To our horror the Jacksons followed us all the way, but they were not going to stop for such a vulgar enjoyment as ours, so we got rid of them at the top. …. Judy [her sister, Juliet] and I had a lovely drive home over the Hoo.  The little stumpy bushes sent such huge long shadows across the grass & there were lots of sweet, clean sheep whose backs just caught the sunlight.  Then the distance was as blue as blue could be & the breeze was so refreshing.”

“ We are still busy with Bazaar work – I only hope all the things we have made will sell!  I hate fancy-work – & bazaars too” [This was undoubtedly the bazaar opened by Countess Lytton on 28 October in aid of increasing the places available at the Hitchin Training school for servants.  Mrs Seebohm was one of the stall holders.  [See Hertfordshire Mercury for 30 October 1885.]

“What a nice day for you again!  Everything here looks so pretty in the sunshine and white dew.  I have been [on] a walk round the garden, with a sister on each side – crossing our little bridge and looking at the reflections of our leafless trees in the pond!”