We arrived at Abbassia Barracks near Heleopolis1 outside Cairo early in the morning, taking over the cavalry barracks and stables from the 3rd Dragoon Guards who were sailing for France.

We took over 2 squadrons of arab stallions the other 2 squadrons of the regiment being mounted on the horses brought from England.  The next day about 1,000 horses arrived from Alexandria and were picketed in the open in the desert for several days and we had to look after them.  Of course the sand bags to which they were tethered were continually breaking so the whole place was alive with loose horses.

We had an amusing first exercise a few days after our arrival.  The Arabs were terribly fresh not having been exercised properly for some time by the 3rd Dragoon Guards owing to their preoccupation packing up for France.  We took the 2 squadrons out exercising one man to two horses but unfortunately the English horses were out at the same time, many of them being mares.  The consequence was that most of our Arab stallions went hot foot after the mares, the men fell off and the English horses squadron was attacked by our Arabs.  Pandemonium prevailed, which took a long time to sort out.

We occupied the barracks and mess with the Westminster Dragoons and a squadron of the Duke of Lancaster’s Yeomanry.  The former thought a lot of themselves and had some rich Officers, some of whom, like George Pope, we liked a lot.  The Duke of Lancaster’s Officers were all charming especially Bobby Greenshields.

The barracks were comparatively new so were the stables and we were quite comfortable.  I shared a room with Thurstan2 with a wide varandah running along one side.

The worst part of the day was the afternoon when in the heat of the day each troop leader had to give his troop a lecture lasting about an hour.  As I was pretty well uninformed on military matters, I did not find this at all easy, so my lectures usually consisted of instruction on stable management or the points of a horse.

We had a bad Adjutant from the 21st Lancers – Lumley Smith – who being a Regular ought to have given instructions to the Officers but he never gave one lecture or talk on any subject all the time we were in Egypt.

I got fond of the men in my troop and found it interesting studying their characters and assessing their capabilities.  I was helped enormously by my excellent troop sergeant – Bert Pusey.  Of course it helped knowing the background of so many of the men and I had commanded them for 2 camps before the war, so we were not strangers to each other.

Almost as interesting as the men were the horses under my charge.  Arabs have a lot of character .  They were easy to ride and excellent to drill on.  It was really extraordinary the weight that they could carry in spite of their size.  I suppose about 15 stone. 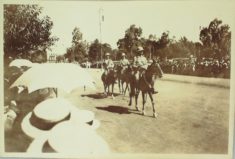 At the end of October we did a route march through Cairo, General Maxwell3 taking the salute, which was supposed to impress the native population to show them that although the regular army had left for France, their place had been taken by an efficient body of men  !

On December 20th there was another parade in Cairo when Egypt was taken over as a British Protectorate.  The Khedive was fighting with the Turks so a new Sultan was appointed by the British Governor to take his place.  Some of us lined the streets and others were in the procession.  We were issued with 30 rounds of ammunition per man in case there was a row, but the whole thing went off well.

The first contingent of the Australian and New Zealand troops arrived in Egypt at the end of the year.  They were a wonderful looking lot of men but their discipline at that time was non-existent.  Owing to an Australian being murdered in a brothel in Cairo, they saw red one night and set fire to the red light quarter of Cairo.  We had to sped a squadron into Cairo to be on the spot to quell the riot and also had to keep a squadron permanently saddled up ready to go to Cairo to help the police at a moment’s notice.  This naturally annoyed us a great deal as we felt that we had not volunteered to serve abroad in order to save the cosmopolitan turks in Cairo from being burnt alive.

However they did not stay in Egypt long but were shipped off to Gallipoli where they fought with great gallantry.

We were lucky in our squadron to have Archie Clayton4 as 2nd in command.  Although he was older than most of the Officers in the regiment he never spared himself, making himself far the most efficient Officer in the regiment.  This, of course, led to a certain amount of trouble as nothing but perfection pleased him and it was not easy to make untrained Yeoman one hundred per cent efficient in a few months.  I had a terrific row with him being fairly undisciplined when he stopped the whole parade one day, calling me up to curse me before all the squadron because when riding at attention I had stood up in my saddle to unstuck my breeches from my bottom, which was uncomfortable on a hot day.  But in spite of it all we were always the best of friends and no one could help admire his keenness and efficiency.

The drunken Colonel5 after a field day in which he bogged everything was deprived of his command and sent home.  Gurney Sheppard6, later killed in Gallipoli, took over command.  He was a charming man although probably not a born soldier, but we were happy under his command.

The next year [1915] started with Christmas leave at Luxor with Cecil Bury7, Bill Cunliffe and Ralph Barnett8 when we visited all the Temples, etc. having a wonderful time away from soldiers and trying to forget the war.

The usual routine continued although training was on an advanced scale.  We took part in several large exercises, the largest being with 20,000 other troops.

We played a good deal of polo at Shegirah Club.   I had 2 ponies, one very unsound but very fast one given me by Wynne Chapman before he left for France.

In February the Turks advanved [advanced] across the desert to try to take the Suez Canal.  We were sent there to help prevent their doing so.

(Incidentally they used the same route as the Israelites used when advancing across the desert to take the canal in 1957 and the same thing was noticed as we found that in retreating both the Egyptians in 1957 and the Turks in 1915 discarded all their equipment incuding their boots, the whole desert on both occasions being strewn with boots.)

We went to a place near Ismailia by train at night with all our horses and were camped in the sandy desert.  The horses were picketed to sand bags buried in the sand.  We had big tents only with no mess tents.  The Officers had to pitch their tents in line at the end of the horse lines belonging to their respective troops and they had to be exactly in line.

When I came to pitch mine I found it would have to be on top of a heap of horse manure, so I asked that it might be pitched a few yards to right or left.  Answer “No, remove the dung”.  I was completely fed up with such ridiculous and bogus discipline when I was on active service and about to be shot by a Turk the next day  !  However, I had to obey orders and it was on this occasion that I was responsible for the remark which has for the remainder of my life been brought up against me “I wish I was dead”.  But can you imagine such nonsense.  It was pretty hot in the camp and some of the horses went mad.  One had to be tied to a telegraph pole as it was always getting loose, but eventually it had to be shot.

We were brigaded with some Indian cavalry.  Our Brigadier or Divisional Commander was a typical little bouncing interfering Indian cavalry officer.  He was always on the run and had us out for continual exercises and parades.  Eventually after many false alarms we were paraded before dawn one day to rout the Turks who I think by that time were thoroughly demoralised and retreating to Turkey without their boots as hard as they could go.

However, we assumed a most martial demeanour and in hushed silence, although the enemy by that time were probably 50 miles away, no talking, no smoking, etc., advanced across the canal over a bridge.  Advance patrols were sent out right, left and centre while the main body, including my troop, advanced in close order covered in dust.  The advanced patrols killed or took prisoners one or two Turks but we saw nothing except boots and discarded equipment and near the canal a few dead Turks.  A cavalry advance in such country was of  course limited to the distance the horses could go without water,  There was no water so we had to come back.  The horses were watered at 4 a.m. when we started off and not again until 8 p.m. when we got back.  Our only casualty was one horse shot by one of the Westminster Dragoons.  Dinkie Ram9 shot a wounded camel.  We went out full of ardour for our first bout of active service, thinking we were going to rout the enemy, and came back with our tails between our legs not having seen the enemy through no fault of our ours.

We ought to have been sent out two days before, directly after the Turkish attack failed and then we might have done some good.

We eventually went back to Abbassia Barracks to resume the old round of drill and field days.

On most of the big days I acted as Galloper or A.D.C. to Brigadier Tyndale Briscoe10 and I did the same, feeling very grand, in a march trough Cairo of all the troops round Cairo for Sir Ian Hamilton11 before we went to Gallipoli.

I rode behind the General in front of all the cavalry.

For recreation we played polo about 3 times a week.  I had 3 cheap ponies one of which I sold at a handsome profit to Evelyn Rothschild when a Brigade of Yeomanry arrived in Egypt.  The polo was great fun and the club grounds were charming.  We also did some racing and saw ll the night life of Cairo, which had to be seen to be believed.