Our Colonel, Henry Abel Smith1, was not passed for active service and the W.O. instead promoting Gurney Sheppard2, the 2nd in command to be Colonel, sent a ghastly old dug out Colonel Harrison3 who had commanded the Leicestershire Yeomanry many years before, to take command.

He arrived on the eve of our departure for Egypt and never while commanding took the trouble to change his badges from Leicestershire to Hertfordshire Yeomanry.

He knew less than we did about soldiering and was generally tight.  It was said that you could easily get tight from the smell on his breath.

Luckily soon after we got to Egypt he had D.T. after 30 whisky bottles were found under his bed and was sent home.  Gurney Sheppard then assumed command.

The men in squadron (A) came from round Watford chiefly with one troop of Londoners commanded by Ralph Barnett4.

The other officers were –

We naturally always considered that we were the best squadron in the regiment and we probably were as Archie Clayton was  an enthusiastic and knowledgeable soldier and kept us all, including our Squadron Leader, up to the mark.

My troop consisted of men living round Munden9 whose home and background I knew.  My Troop Sergeant, Bert Pusey, lived at Leavesden and was a local horse dealer and farmer.  A first class man and an excellent horseman.

The Herts. Yeomanry band did not accompany us abroad, the men in it volunteered for foreign service and were fit were made batmen and mess waiters.  I was the first and last person to have a sergeant s a batman. 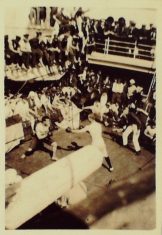 boxing on SS Ionian on the way to Egypt

We embarked at Southampton and sailed to Alexandria in convoy, 2 lines of ships escorted by 4 cruisers.

We steamed at about 12 knots.  Could not go faster as the convoy had to keep together and its pace was regulated by a slow ammunition ship.

We were passed by another convoy in the Mediterranean of 23 ships taking Indian troops to France.

Our convoy had about 40,000 troops on board with one ship full of horses.

The voyage took from September 10th to 25th.  It was uneventful so far as submarines were concerned.  Ralph Barnett4 was in charge of all the horses that we took on a separate ship.

We did a lot of training during the voyage, learning semaphore etc. or , in my case, trying to.

Thurstan’s first child – Diana – was born just before we left England and poor Thurstan had a worrying time on the voyage thinking about Viola.

On arrival at Alexandria we had a terribly tiring day unloading the ship but all went well except for 2 lots of saddles that fell into the sea and one mare that foaled on the dock-side.  This is reported in my diary as the worst day of the war so far  !