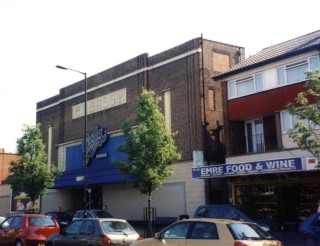 This wonderful piece of art-deco was opened in 1937. It had a beautiful Christie organ, played before the war by Harold Betts, who became a well-known broadcaster.

It also produced variety acts on a Sunday evening. One famous star who played there was Arthur Askey. The Embassy was converted to four smaller auditoria in 1981 and closed its doors in the 1990s.

The building is now the Gala Bingo venue.