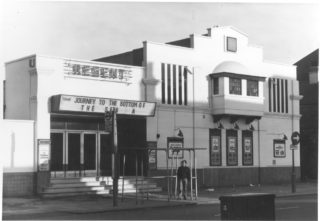 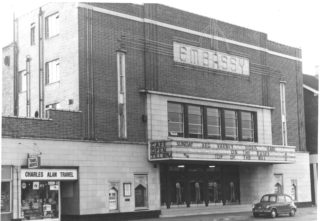 Most cinemas today, with some honourable exceptions, are multiplexes located in retail parks or shopping malls. They serve the purpose of giving a wide choice of films in comfortable settings, but they still feel a little soulless to those of us who grew up with the old-style cinemas ― not to mention being often less convenient to get to.

Before recent decades, though, most towns had a cinema in the town centre, or even more. Waltham Cross was particularly fortunate to have two rival cinemas, facing one another across the High Street. Now, of course, it has none.

The first cinema in Waltham Cross was opened in 1913 by Captain Cecil Clayton, who lived at Woodlands in Turners Hill, Cheshunt. Clayton was a showman specialising in aerial displays. At fêtes and fairs all around the country, he’d show off his Bleriot plane, or else parachute from a hot-air balloon.

Clayton was also interested in the growing craze for cinema and had shown films at Trinity Hall. Finally, on 20th October 1913, he opened the Palace, originally known as the Electric Palace, on the west side of the High Street, with 600 seats. The first manager was a Mr Marsden, whose family for many years ran an electrical shop next door, and the first film shown was Mystery of the Great Diamond.

The Palace was sold to Captain V. A. Haskett-Smith in the mid-twenties, and eventually bought by Shipman & King in 1931. Now renamed the Regent and gradually starting to show talkies, it continued for several decades, in spite of competition from the more luxurious Embassy across the road. When I remember it, in the 1960s, it had an image of being something of a “fleapit”, though this was perhaps a little unfair. I don’t remember it as being dirty or dilapidated, though certainly less fine than its rival.

I saw a number of films at the Regent during the sixties, though the occasion I remember most clearly was being taken to see The Ten Commandments. This would have been around 1964/65, almost a decade after it first came out. In those days, long before videos, DVDs or online streaming, successful films would do the circuits over and over again. In spite of not being a grand cinema, as far as I recall the Regent’s facilities did justice to de Mille’s epic.

The days of the high street cinema were numbered, though, and it was generally the smaller ones that closed first. The last films shown at the Regent were The Devil Rides Out and Atlantis, the Lost Continent on 5th November 1972, after which the building became a Mecca Bingo hall. This in turn closed in 1986, and the building was demolished the following year. The site is now occupied by the Eternal Youth health club.

During the 1930s, the growing demand for cinemas led to an attempt by Shipman & King to extend the Regent. However, they were unable to acquire the land necessary, so instead they build a brand-new cinema opposite. Designed by architects Howis and Belcham and with an interior by Mollo & Egan, the Embassy was a fine example of classic Art Deco cinema design, with plush red seats, silver grey walls and a balcony above the large main auditorium. The building also contained a restaurant.

Opening on 18th November 1937 with the films His Affair and Fifty Roads to Town, the Embassy also had a small stage and a Christie organ. Before WW2, this was played by Harold Betts, who went on to become a noted broadcaster. The stage was used for Sunday evening variety shows, including appearances by Arthur Askey.

I remember rather more films that I saw at the Embassy during the sixties and after. Early memories include The King and I (I was very young and got a little bored, and recall being more interested in investigating how the toilet doors worked), the animated 101 Dalmatians, The Sound of Music and one of the Carry On films, although I know I went more often than that.

The two most vivid memories I have of the Embassy in the seventies were both from 1977 ― the original Star Wars and Close Encounters of the Third Kind. Both were stunning on the Embassy’s huge main screen. Unfortunately, I chose to see Close Encounters in the afternoon during a school holiday, and there was a good deal of disruption from kids running around playing. Until the mother ship appeared, that is. Then there was total silence, punctuated by the occasional “Cor”.

In 1972, the balcony was converted into two smaller screens, although the original downstairs auditorium was preserved for the main screen. Unfortunately, though, the conversion covered much of the Art Deco design. A fourth screen was added in the 1980s, in what had been the restaurant.

The Embassy was taken over successively by Cannon Cinemas and MGM Theatres, and finally closed on 16th September 1993. Like the Regent, it became a bingo hall, in this case run by Gala Bingo, and was restored to a single auditorium, though the Art Deco look was further destroyed in the process. The bingo hall closed in 2017, and the building now stands derelict.

It’s a sad end for Waltham Cross’s proud cinema tradition ― but does it need to be the end? There seems to be an appetite now for traditional cinema-going, alongside the soulless multiplexes, and other Art Deco cinemas have been restored and reopened, most notably the Odyssey (formerly the Odeon) in St Albans. So why not the Embassy, too? Perhaps eventually classic cinema may return to Waltham Cross High Street.