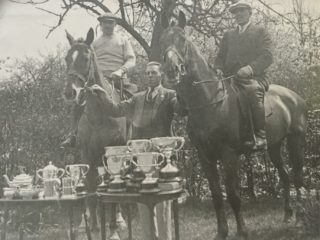 An array of trophies

This splendid array of trophies prompted an investigation into the story behind horse racing in the area around Colney Heath. In his photograph Philip Franklin is holding the horses while his father (another Phil) is on the right mounted on Colonel Sparks. On the left is their jockey (unnamed) seated on Cushende.  The horses were stabled at Roundhouse Farm in Colney Heath.

These two bold point to point riders were born too late for what at one time had been a famous event – the St Albans Steeplechase.  There is already a fascinating piece on the Herts Memories site on Tom Coleman of the Turf Hotel which was once situated in Chequers Street (popularly known as Tom ‘of the Turf’ ) so there is no need to repeat this, although it is difficult to resist the description of the Turf Hotel as being ‘generally well filled with the fast youth of the metropolis.”  However going through the nineteenth century specialist press some light is shed on this short lived but significant,event, although it was overshadowed by bigger race meetings later on.  The very fact that Captain Becher (of the Grand National Becher’s Brook fame) rode at St Albans shows its importance.  One contemporary commentator wrote that “No man of that day can forget the excitement caused by the St Albans Steeplechase of 1832 in which nineteen horses came to the post.”

The first St Albans steeplechase came off in the spring of 1830.  Sixteen started from Arlington Church to the Obelisk in Wrest Park near Silsoe.  Coleman’s general idea of a steeple chase was two miles out and two miles in, and keeping the line quite dark, so he concealed men in the ditches with flags, which they raised at a given signal as soon as the riders were ready.[

There were clearly some equine stars around who made their appearances at the St Albans meetings This included a ‘mean-looking bay horse and a tremendous puller’ which went by the name of ‘Moonraker’. In 1832 The Squire, the nickname for Coleman, thought nothing of buying a better horse with the express intent of beating the star of the show.  There was a little bit of a grudge match (or rather disdain for the professionals) when he declared “I’ll teach these London riding-masters how to ride” with reference to the jockey on the mean bay.  In fact he was justified in this instance as his newly acquired horse out-ran the favourite.

There were some interesting anecdotes such as the winner of 1832 being the property of the Rev. Lord Frederick Beauclerk, rector of St Michael’s, a St Albans parish, but which ran in the name of Mr Brand, as the bishop might have objected.

The one fact I can’t seem to establish is exactly where this race ran, although it appears to have been at the whim of the famous Tom.  Perhaps someone else has some knowledge of this? tI would be interesting to see whether the course is still open country or would involve leaping through people’s gardens and over their fences.