A flight of fancy over Welham Green 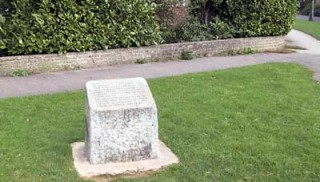 The balloon stone of Welham Green

These days we take for granted the constant criss-crossing of our skies by different types of aircraft. But in September 1784 local people must have watched in fear, terror or even astonishment as a large, passenger carrying balloon passed overhead. Nothing like it had ever been seen in England.

A cat and a dog in a balloon

The intrepid Airman had taken off from the Royal Artillery Ground in London soon after 2pm. He carried with him a dog and a cat. He came down to earth again minus the cat at about 4.15pm.

The cat’s escape would seem to be explained by the Balloon stone at Welham Green. There is an inscription on the stone which says:

“Near this spot at 3.30 in the afternoon on September 15th 1784, Vincenzo Lunardi, the Italian balloonist made his first landing while on his pioneer flight in the English atmosphere. Having handed out a cat and a dog, his partners of the flight from London, he re-ascended and continued north-eastward”. As if to reinforce the fact a nearby road is called Vincenzo Close.

The fate of the cat

The balloon finally came to earth at Standon Green End with just the dog still on board. The cat had been handed to a local female villager whilst the balloon was on the ground in Welham Green. Contempoary accounts named the woman as Mary Butterfield. She then apparently sold the cat to a man on horseback. The site of the stone in Welham Green has been named Balloon Corner. This was probably the place where the villagers had stared into the sky on that September day in 1784.

In September 1970 a hot air balloon was launched from Welham Green to commemorate the event but owing to lack of wind it returned immediately back to earth.