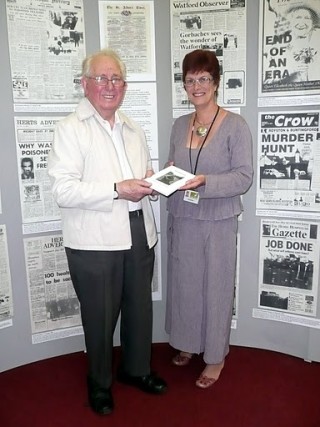 My association with the Library started in 1923 when I was 8 years old. Being a fast reader, I could never get enough to read. Though I knew that I could get a reader’s card at the age of 9, I was impatient and tried my luck with Mr Fred Wright who was Librarian at the time. He picked up a book of fairy stories and asked me to read it to him. I did and I was in.

From then on I was a regular, probably averaging 3 times a week, as we were only allowed one book at a time. By the time I was 13 or 14, Mr. Wright got me to help him with some of the cataloguing and such like work. This, of course, happened when I was on holiday from school and I was paid. Incidentally, I had been allowed to join the main library when I was 12. My first introduction to Charles Dickens and an affection for his work that has lasted to this day.

In 1931, I was sixteen, and had left school with 5 fairly good passes in “The Cambridge School Certificate”. For several months I could not get a job. Then out of the blue Mr Wright told me that The Library Committee was allowing him to have an assistant, and he put my name forward. My starting salary was 15 shillings (75p) a week. For the next 6 years or so I had a job that I really enjoyed; Mr Wright gave me more and more responsibility and even allowed me to buy books for the library. The parting came when I was 22 years of age and my salary was £105 a year. My friends had finished their apprenticeships and such like, and were on adult pay, which was more than mine was. The country was re-arming against Hitler and Industry was calling for more engineers. Though I was not an engineer I was taken on by the Royal Small Arms Factory in Enfield and trained while earning. My first weeks pay was more than double the wage I had been getting from the library.

Back to Cheshunt Library; it was very different in my early days. It was half the size it is today. You entered through a main entrance into a small foyer. In front of you was a small counter bounded on either side by indicator boards from which the reader could find whether the book they wanted was in or not. In those early days readers were not admitted to the shelves and could only use the book lists, which were available. This appalling system was junked in either 1933 or 1934 and replaced by the open access system we know today. Even then the Library Committee economised by getting the craftsmen doing the job to use much of the timber that had been ripped out.

On the left hand side of the foyer was a reading room with newspaper stands and a large table and chairs. On the right hand side was the children’s library. The room at the top of the stairs was as it was today, though in my time it was only used as a storeroom.

When I left Jack Edwards took over; he was only 17 but his potential was soon recognised by the powers that be. By 1940 I was in uniform and didn’t see much of Jack because he himself was in the Army. As I was older I was demobbed before him and lived in Enfield until 1947. Round about this time I met him again and he told me that he had been given leave of absence to study for his Fellowship of the Library association. After this he became the Chief Librarian for Cheshunt. His old boss Mr Wright had tragically died in 1943 from the effects of catching a chill while fishing.In my opinion, Jack Edwards was the finest Librarian there could be. He was a visionary and was always thinking how he could improve the library service. I feel quite sure that the fine service we have today is the result of his labours over many years.