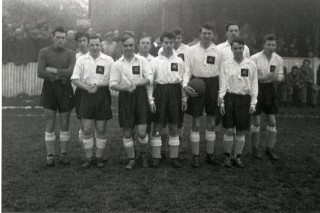 Pegasus F C team about to take the field to play Stevenage Town in the second round proper of the Amateur Cup 22 Jan 1955. Stevenage lost a very good game 5-2. In the previous Town had beaten another famous old team Corinthian-Casuals.

My step- father, Fred Taplin took this photograph, plus others, unbeknownst to me.

Pegasus were a nomadic team, having no home ground of their own and most of their games were friendlies, sometimes against visiting Amatuer International teams, all their competative games being in the Amatuer Cup, which they won on two occasions.