A brief glimpse into Edwardian times 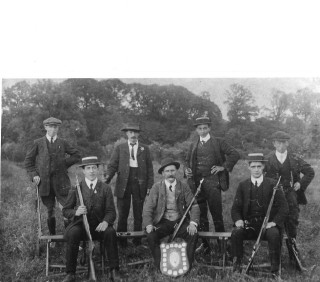 Thanks to Cled Fursland, a resident of the village, who permitted me to examine a photograph and some notes and correspondence I was able to put together a better picture of an activity which was quite popular just over a century in the County of Hertfordshire. Having been personally involved in shooting at various locations over the years, first as a boy scout in the 1950’s, I was interested in comparing the informality of Edwardian days with more modern times.

As far as can be ascertained the ‘home’ range was situated in a field close to the watermill on the River Beane. Nothing as sophisticated as sand-filled butts appears to have been required or used, only a natural hummock in the ground level to stop bullets once they had passed through the targets. With the potential for a .303 round to travel for over a mile it is interesting to contrast this with current (and I am sure laudable) precautions to protect the public safety. There is a tale of a farmer’s cow once being killed by a stray round, but there appear to be no firm details of this.

The Watton at Stone Rifle Club was affiliated to the National Rifle Association from 1907/12, when the Club’s membership fluctuated between 26 and 62. Although the Club competed against Hertfordshire clubs such as, Ware Marksmen, Bishops Stortford, Sawbridgeworth, Ware Parish, Amwell, Leavesden, and Sarratt, it particularly distinguished itself at a contest organised by the Daily Mail in September 1911 when it came 123rd out of 500 clubs.

The photograph is believed to date from 1910 commemorating the Winter League Shield, won by Watton at Stone that April. It was presented by a Mrs.Croft – wife of Henry Page Croft, who was later to be become 1st Baron Croft of Bournemouth. 1910 seems to have been a particularly successful year as the Club also won the Brickendonbury Cup that year.

Some of those in the photograph have been identified – Arthur Coggin, Lance Bonnett, Frank Pearman, Daniel Hipwell, and Fred Shippin.