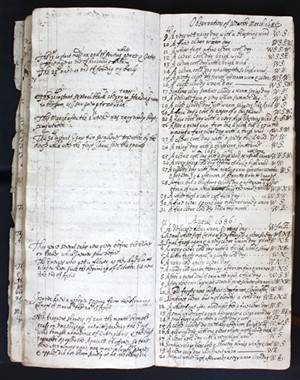 Sir John’s grandfather was a Dutch protestant lawyer who left Ghent for England in 1564, together with his wife and two sons, one of whom was Jacob, Sir John’s father. They came to Hertfordshire to escape religious persecution. The family prospered and Jacob became a successful brewer, married Anne, and John was born in 1618. Unfortunately, Jacob died in 1622, Anne re-married Sir Thomas Myddelton who had been Lord Mayor of London.

Before Sir John’s birth, his father Jacob had obtained a mortgage on Rothampsted House in Harpenden and in 1623 Anne bought the property outright on behalf of her infant son John. Sir John was given his knighthood by Charles I in February 1640. When he wrote his diary in his late 60s, he had been living at Rothampsted Manor for over 40 years, and had had three wives, and seven children.

Sir John would not have had a thermometer; he was however one of the first private individuals to own a ‘weather glass’, a domestic mercury barometer. So his diary entries convey an atmospheric mood, with reports of the state of sky, wind direction and precipitation.  He also used his diary to record observations and activities around his farm, garden and household.

The weather diary is held at Hertfordshire Archives and Local Studies, Ref: D/ELw/F19.