The Funeral of Sir Thomas Myddleton 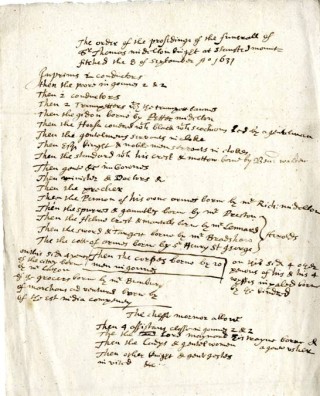 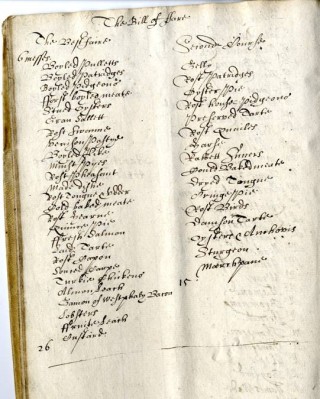 Accounts for the funeral feast
Hertfordshire Archives and Local Studies

Jacob Wittewronge’s widow married Sir Thomas Myddleton, one time Lord Mayor of London. His brother, Sir Hugh Myddleton, was the engineer of the New River which brought fresh water to London from Hertfordshire. the head of the river is at Amwell.

When Sir Thomas Middleton died in 1631, his funeral was lavish even by the standards of the day. We have the lists showing the order of the procession (the body borne by 20 “men in gowns”), the food served and the table lists showing how the “first sort” had much finer food than “kindred” and “other sorts” of people. The family even provided funds so that all the mourners would be suitably dressed. These accounts show that at least £1480 was spent, a fortune at the time, and the bill for the embalming of the body was £26 17s 2d. A quite reasonable yearly salary at this time would be about £2 0s 0d – you could employ 13 men for a year for the cost of embalming Sir Thomas!