Priorities of the Priory 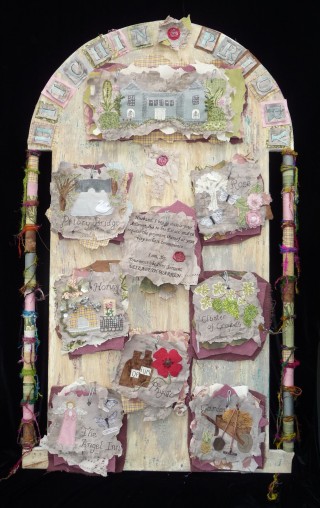 I was invited to join a group of nine learners from ASCEND Charity (funded by HAFLS) to participate in the Threads of Time 2 exhibition. We went on a field trip to the archives and Hitchin Priory and our tutor Textile Artist Sian Fenwick guided us through the process. Proudly we were the only adult group participating in the exhibition.

Our voyage of discovery about Hitchin Priory and the Delme-Radcliffe family started on a glorious sunny day in April when we visited HALC at County Hall, Hertford.  What a treat was in store for us.

We were warmly welcomed by Marian Hill, our guide who explained the layout of the building, impressed the need when handling archives to have clean hands.  White gloves are unnecessary and only worn for show on TV!  No pens allowed but pencils are ok.  Walking through the Library we passed researchers seated at desks with open reference books earnestly tapping information into their laptops.  We entered the air conditioned archive room which had a long table covered with documents and another table with photographs.  It soon become apparent the Radcliffe family never threw anything away.  There was the minutiae of day to day to day living in the 17th & 18th Century;  housekeeping bills itemising salt, flour, anchovies, black lead, middling’s, barley meal;  bills for the garden, trees, flowers and vegetables.  The family were immensely rich able to afford to pay for greenhouses to grow exotic pineapples.  There were bills for carriages, stabling, a new wing’s furniture, wallpaper, clothing and naturally the library; apothecary bills, recipes for medicines; a travel journal detailing a journey taken through Yorkshire and Scotland.  How did the family amass such riches?  Starting in 1580 they were one of only 12 merchants allowed to trade in the Levant dealing in high end goods such as silks and carpets.  A very rare document was recently discovered in the archives – a ships manifest from 1750, listing members of the crew and their jobs.  The most telling object we were shown was a huge pile of bills almost welded together with age which had been put on a spike.  The breadth of the archives is astounding.  Our heads were reeling from looking at all the papers before us.  In the afternoon we visited the remains of the family seat, Hitchin Priory which has been turned into a hotel set in parkland.  After looking at the Priory we had afternoon tea in the grounds of the hotel.

Back in the classroom after our visit to the archives we were suffering from information overload and it took us a little while and much discussion to come up with the outline for our project.  We took as a starting point the outline of one of the stone arches framing a window in the Priory. Each person chose something to visually represent what they had read in the documents when visiting the archives. Using stitch, applique, embroidery and beads we created individual artworks. The spike of papers had made a great impression on us all and we decided that this had to be included.  Finally an action plan was made.  The window frame about 4ft high was made in wood, painted, with stitched individual letters spelling out HITCHIN PRIORY appliqued around the arch. Wrapped around the pillars of the window frame were strips of silks and exotic fabrics representing the goods brought home from the Levant and referenced the looms of the carpet makers. The frame was roughly divided into nine sections, and an underlay of various fabrics was fixed to the board in each section to represent the papers on the spike  When these fabrics reached a small mound each person spiked their work on top of the fabrics.

The rustic bridge near the Priory

A beehive which would have been situated in the extensive gardens

We breathed a sigh of relief when we finished the work just in time to get it to County Hall, Hertford