You are here: Home>Herts history>Leisure>Threads of Time 2>Carmelites, Kilims and Country Estates 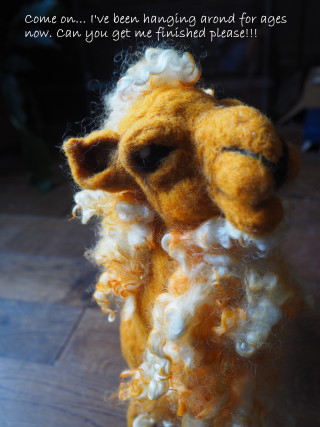 Hurry up and finish me please! 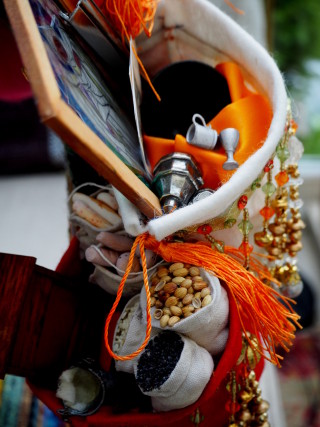 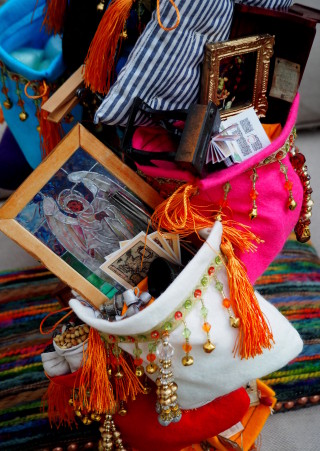 Miniature objects from the early history of Hitchin Priory 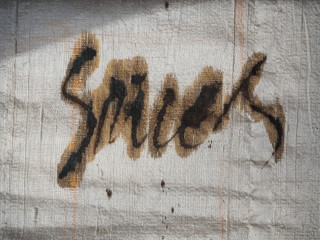 Drawing ink on silk base - to represent an old document 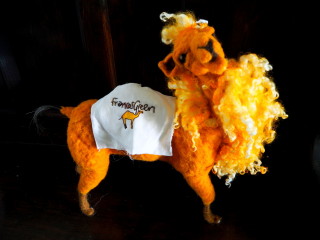 I'm a camel and proud of it!

My alternative site of pilgrimage in Ely! 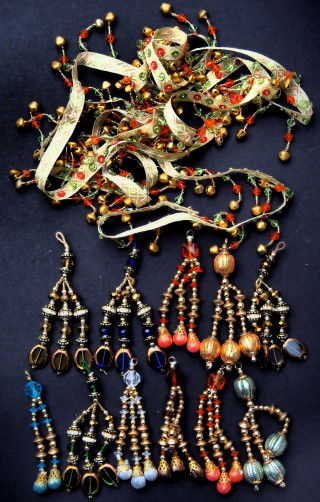 Beads for camel bags from craft shop in Ely 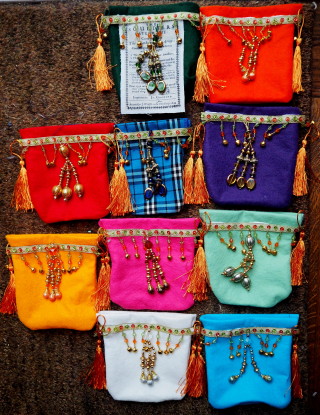 And here are beands on the bags (with tassels!) 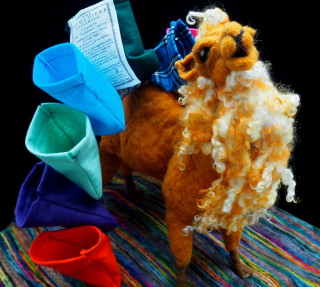 Does my bum look big in these bags?! 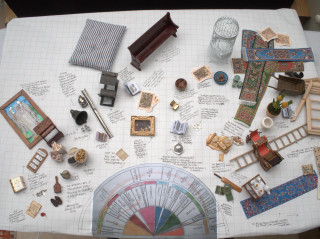 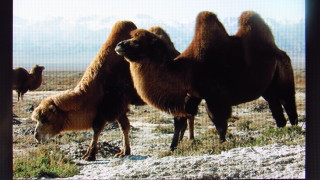 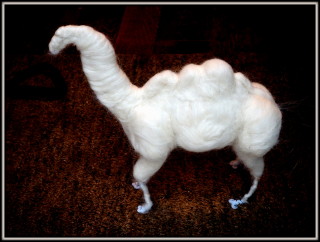 Needle-felted camel (not yet completed!) 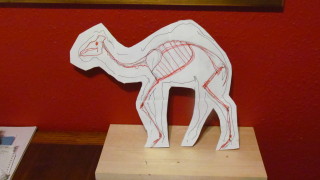 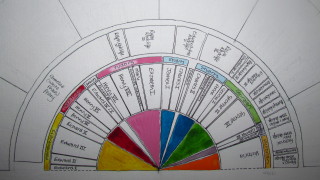 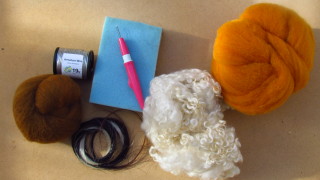 The start of a camel (needlefelting kit) and some wools! 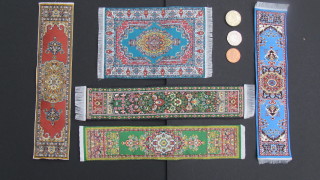 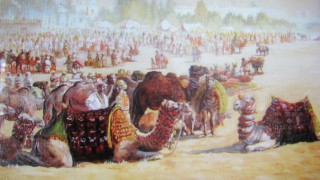 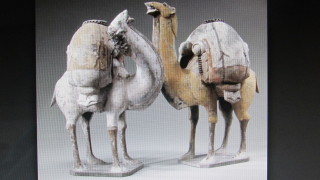 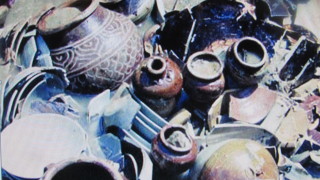 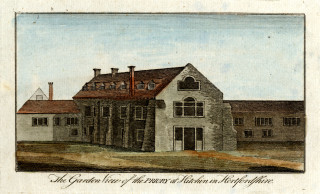 The camel races toward that finish line. Well, strolls perhaps rather than races, but his direction of travel is unambiguous: hurrah! Yesterday I started putting all the little miniature representative objects into the camel bags; quite a fiddly and glue-sticky job. Not sure if the carpet looks better for it or not!

From the pictures (scroll down below camel), hopefully you can see that I romped happily through the early Hitchin Priory years yesterday. Today I will work through with objects post Cromwell and onto the recent past.

Really looking forward to our meeting on Monday morning and catching up with everyone else – have great weekends meantime.

Crikey – where did that last month go?  Oh, I know, I was on holiday in the arctic seeing total solar eclipse and Northern Lights!! Feeling is now returning to extremities of limbs.  Kemal, of course, is unsympathetic.. it’s high time, he says, to get him finished.  He’s the boss!

What I have been doing is sorting out the base to support him.  I have been trying a number of different weights and colours of fabric wrapped around polystyrene.  Finally, I have decided on some light sand-coloured silk – in part because of the colour but also because I have been able to write on it with drawing ink and it gives a lovely sense of old faded parchment.

Eva has suggested I name the beast Kemal.  I like this and am off to put the suggestion to him and arrange, if he is agreeable, some sort of naming ceremony (no spitting allowed!).

Here are my 100 words for the catalogue and background material…

Hitchin Priory’s inhabitants have always been aware of the wider world, its interconnectedness and great gifts. My needle-felted camel is a symbol: bringer of the Carmelites escaping persecution; transporter of goods along silk routes for the Levant Company; means of survival still for many communities.  The coloured bags represent different English/British royal dynasties over time e.g. Tudor rose, Stuart tartan, Regency purple; they carry a selection of items we know to have been important to the many different lives lived within the Priory.

A great meeting today at HALS.  One of our artists has finished her piece already.  It was stunning and very thoughtful.  Cripes – better get a speed on!  I have just tumbled the camel out of bed for an early start and he is spitting crossly all over the place having been deprived of his usual lie-in!

We had a day trip to Ely yesterday (mainly to see exhibition of ecclesiastical embroidery at the Cathedral) but, while there, I came across an amazing craft shop at 7, Market Street.  I bought all the embellishments for the camel bags on one go – see photos! It was the kind of shop designed to drive anyone keen on textiles into a mad frenzy of shopping!

I have been working on the bags being transported by my camel. The bags will be in colours reflecting the changing Royal families over time (see photo of semi-circular representation of time) and the contents will be a selection of objects that we know were important to, or representative of, the inhabitants of Hitchin Priory over time.  I have had a brilliantly fun time discovering the whole world of miniature artefacts and furnishings that’s out there.  Is there anything that can’t be obtained in 1:12 scale!!

We had a very inspiring meet-up of the group last Monday and it has served as a great spur to action.  My camel is edging towards completion, and you can see the beast here now sporting a natty saddle-cloth which will shortly be winging its way to Eva.  (Thanks again Eva for such a brilliant idea of the signatures, and for taking care of all the super arranging).

At the meeting I said I hadn’t named the camel as, at that stage, I wasn’t sure whether it was male or female.  He is now proudly sporting a substantial amount of chest hair… and so I am concluding he is a bloke. I don’t want to be stereotypical here but (and reassure me ladies…), that is more likely overall!

The next stage is to make and assemble his saddle bags.  He isn’t strong enough in himself for the great burden to be imposed on him.  So I took a trip to Mill Green Forge in Essendon this week and they are making me a metal support which I shall incorporate into the overall design.

Onwards and upwards… hope everyone is getting on well, and I look forward to meeting the afternoon group of ToT2-ers over lunch at the next meet-up.

Happy New Year to all fellow artists – and wishing everyone a healthy, happy and creative time of it!

I have been camel-wrestling over the festive period, and have managed to achieve the basic shape of my needle-felted camel by building layers of needle-felting over a wire armature covered with pipe-cleaners.  Here he/she is (sporting underwear only).  The next stage is to needle-felt on the top coat and model the face.  I am aiming for a shape that is recognisably camel but which also reflects the designs of the ancient Chinese tomb camels (photo below).

I have been fiddling around with scale and working out what will best suit. My Camel will be 1:9 scale which makes it both sufficiently small to be workable in needle-felt but large enough to show detail.  Having drawn the rough outline of a camel to this size, I have sketched in the main skeleton details ready to make the armature. Here goes!

The arrival of emails notifying us of our next ToT2 meeting reminds me how quickly time can pass.  I am currently working on details for the scale, armature and plinth for my camel design. This is the difficult technical bit; necessary but slightly less fun than what will follow!

I have been thinking about colour schemes.  My design will revolve around a camel, and the load that it carries.  I wanted somehow to capture a sense of different journeys…so not only the plod of the camel along the silk roads, but also the journey through time.

The camel will have a heavy load and I have the idea that the bags on its back could reflect colours associated with the different royal households/families that were on the British/English thrones during the sweep of history relevant to Hitchin Priory.

I have drawn out a diagram which sets the occupants of the throne against the occupants of Hitchin Priory just to help me get a sense of time…. and have assigned colours (the yellow of the Lion in their family crests for Plantagenets, Red for Lancastrians, White for Yorkists, Pink for the Tudor Rose, Blue (tartan) for the Stuarts, Georgian Green, Regency Purple and Gold for the Victorians).  The idea is that the camels bags will be in these colours and in this order to symbolise the passage of time across its back.

That, at any rate, is the current plan……

So, my design will revolve around a camel, needle-felted and free-standing. I need to go away now and do some serious thinking about scale and engineering to ensure the beast has a chance of remaining upright!  But I thought I would upload a photo of some of the basic raw materials that will go into the making of the camel.  The wools feel lovely and I am looking forward to this next stage!

The inspiration for this approach from a technical perspective comes from my discovery of a gorgeous website  www.sarafinafiberart.com

The artist, Sara, creates the most amazing needle-felted animals.  There isn’t a camel-kit available…and in any event, I am inspired to use a design based on the ancient Chinese camels. But what a talent she is!

I had what for me amounts to a small brainwave the other day.  I know I shall want to include some element of carpet in my design and was not sure how to go about getting a small piece to scale.  I’m not a weaver and didn’t fancy embroidering the patterns.

But then I had a sudden thought about dolls houses!  I am vaguely aware that some people take the furnishing of miniature houses VERY seriously…and sure enough a quick inspection of that world demonstrates that this includes the import of tiny Turkish woven carpets.  I’ve obtained a small selection and photographed them (alongside the average annual income I get for my poetry) so you can see the detail to scale. Amazing and rather beautiful.

I work up this morning realising I am developing a bit of a thing for camels, and deciding that a camel will be my central motif for this project.  They are after all beasts of burden, ships of the deserts, and transporters of people and wealth.  A camel is as relevant to the history of the Carmelites in their once opulent Priory (Carmelite tradition traces the origin of the order to a community of hermits on Mount Carmel in the Holy Land, where there must have been a fair amount of camel-riding) to the Radcliffes in their plying of trade via the Levant company and through the silk routes.

I had a fleeting question about what species of camel would be the correct one; it was quickly resolved by a speedy Googling over breakfast.  One hump or two – seemingly two as depicted in a very atmospheric painting of life on the old roads!

I also discovered – and LOVE – the representations of camels that were placed into c 6th century Chinese tombs.  These are fantastic creatures!

The other theme rising to the surface is that of vessels; those carried along the silk routes.  I have found a picture of some silk road archaeology which shows the range of pots used.  I’m thinking about the load that a camel carries and what that load, and its constituent parts, might symbolise.

So, time to go away now and come up with a more concrete idea….

We had our first ToT2 project set up meeting yesterday.  It was great to see familiar and new faces (and particularly for me, to meet two new people interested in stumpwork embroidery).  If the afternoon session went as well as our morning one, we are in for a TERRIFIC project and eventual exhibition!

I only know one thing at present; I shall be doing something that isn’t mainly stumpwork this year (although, as a stumpwork devotee, little pieces will probably creep in!) because I would like to improve my needle-felting!

The family records for this project are every bit as interesting as they were last year and it’s a case of waiting for something to click design wise.  I have an existing interest in 16th century history (reformation, etc.) and also travelled around Turkey a few years ago and was very taken with the silk route histories.  I am a poet and two of my poems spring to mind, one about the effects of the Reformation and the other about the old silk route traders.

More later, and I look forward to hearing about how others are getting on!