You are here: Home>Herts history>Leisure>Threads of Time 2>Text and textile: 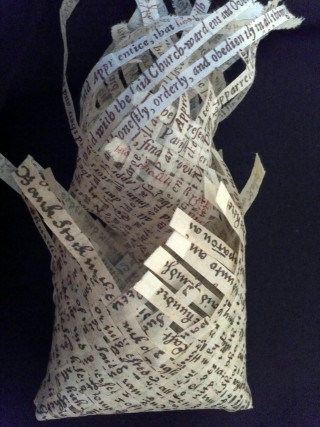 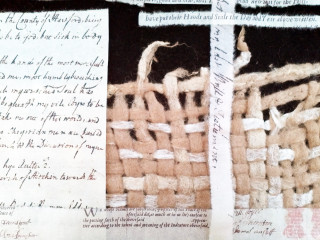 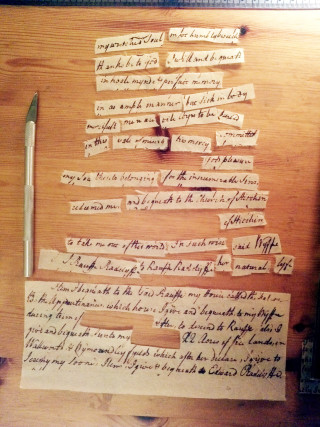 I decided to use weaving in my piece, but wondered how to combine within it references to the Radcliffe trade network and also to the documents themselves.

Weaving is often used as a metaphor for the putting together of ideas in written form. Indeed, poets have always been considered to be ‘weavers of words’.  I’m fascinated by this link, as both text and textiles have stories to tell beyond their literal meaning or function.  I decided to create short poems somehow from the archived words to be included within the finished piece.

I began by re-creating several documents using conservator’s mulberry leaf paper; and from these have woven some small vessels reminiscent of those used to transport the precious commodities.  These weren’t as useful for poetry generation as I’d hoped, however!

Next, I chose to work with a felted textile which was evocative of the silk route, being formed from silk and camel fibre.  I’ve ‘deconstructed’ (ie torn up!) two further documents (Radcliffe wills of 1558 and 1713) and reworked them in a rather less random way into a poem.

This time I gave myself a set of rules to follow, basing it on traditional Ottoman (Turkic) rhyming couplets, as this seemed appropriate here.

I’m working on this piece whilst saving off-cuts for a collage.