You are here: Home>Herts history>Leisure>Threads of Time 2>What We Take Away With Us

What We Take Away With Us 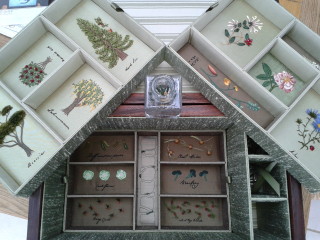 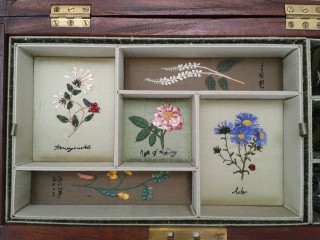 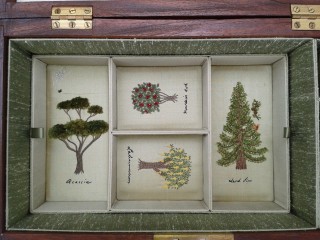 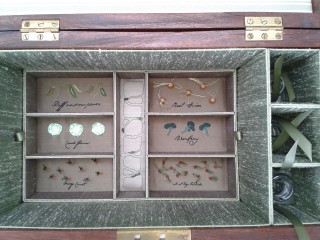 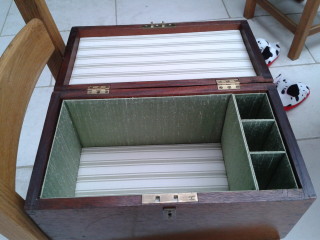 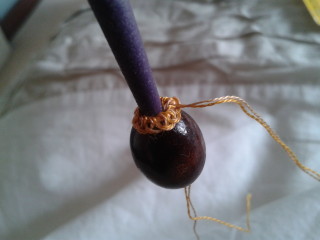 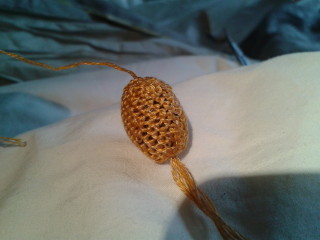 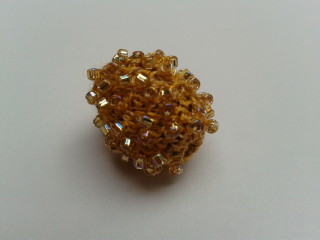 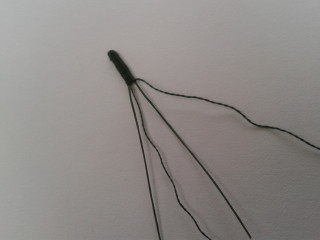 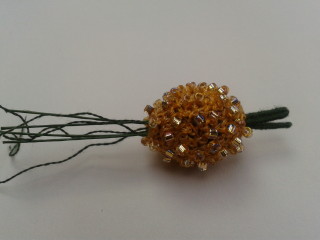 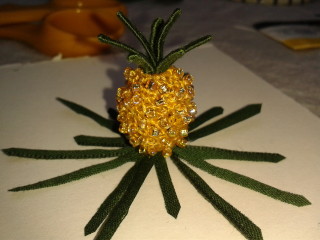 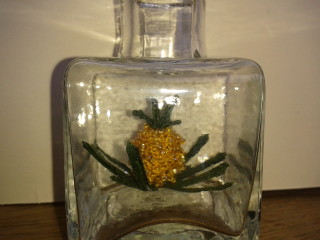 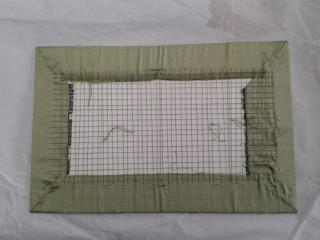 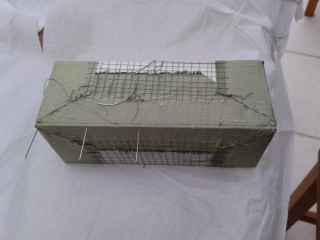 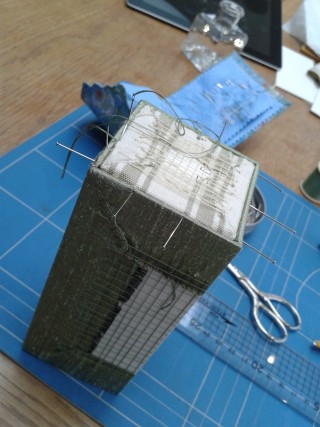 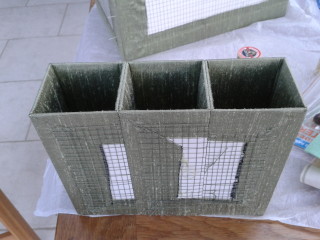 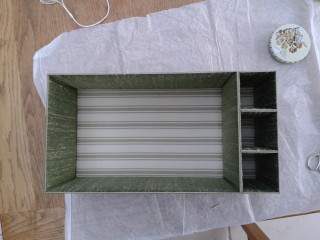 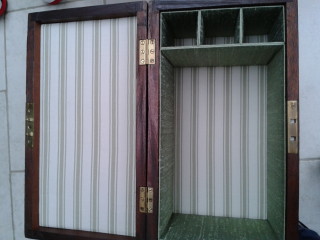 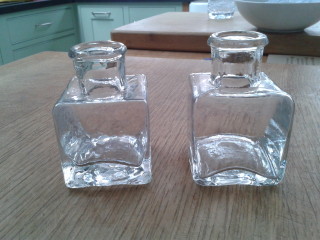 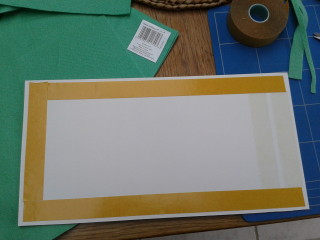 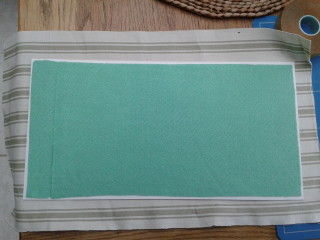 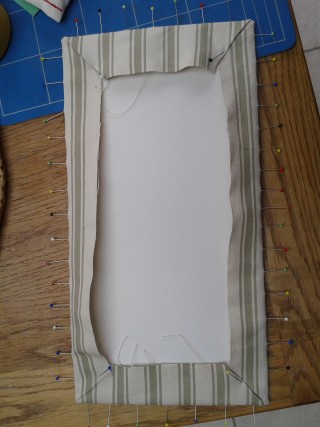 Turn over board and mitre corners of lining fabric 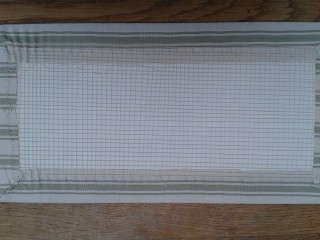 Lace the lining fabric on the back 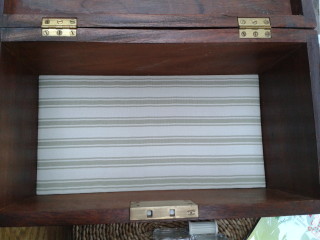 Drop it into the box! 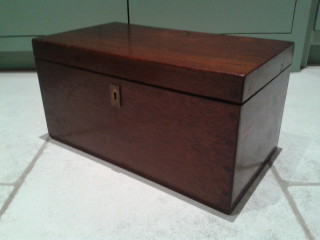 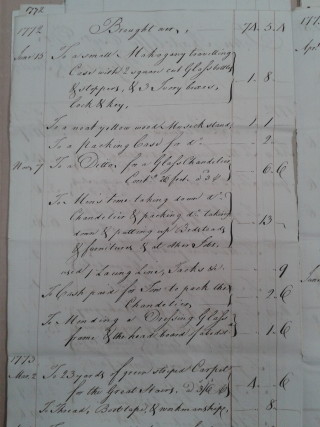 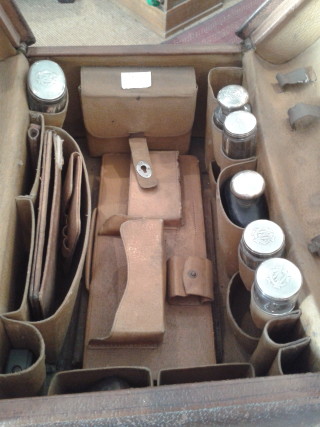 Vintage leather travelling case in a shop in Warminster 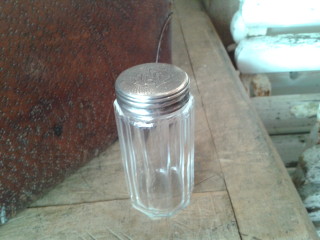 Glass bottle from the leather case 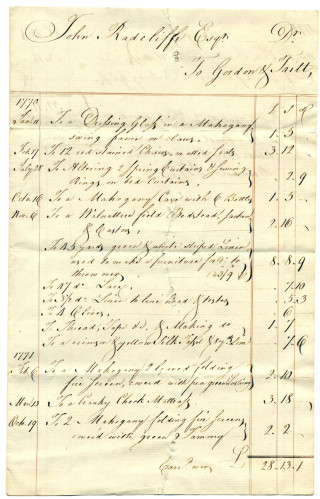 One of the many bills in the Delme Radcliffe collection showing a bill for a mahogany case with 6 bottles. Ref: D/ER/210
Hertfordshire Archives and Local Studies

Finished at last!  After failing to match my green silk, I decided to use different shades for the tray dividers – greens, grey and brown.  I then spent the last few months frantically stitching lots of tiny flowers, trees and vegetables.

I was able to find the actual bills for most of these seeds and plants in the Delme Radcliffe collection – from William North, Dupin and Co and Nathaniel Richmond.  A couple I couldn’t find, and had to rely on the excellent research of Bridget Howlett (asters, carrots and onions) – but Bridget knows her stuff, and if she says John Radcliffe was growing these plants then I believe her! Where possible I copied the bills, then traced the original handwriting onto tissue paper (with eccentric 1772 spelling!) and stitched the name labels through it.

I decided to follow one of the traditions of stumpwork and include some mini beasts on each tray – a ladybird, a spider and some bees. I also had a disaster and got a buttery finger mark on the larch tree (argh!), which I had to cover with a squirrel and a close up section of branch with some larch cones.

My workstation got messier and messier, and my threads more and more muddled, but I got there in the end!

I hope everyone who views the exhibition finds it as inspiring and entertaining as I have – it’s been a pleasure to be part of this project.

So much to do, so little time to put it on the website!  I’m really looking forward to Monday’s meeting, and the opportunity to catch up with the morning group and overlap with the “afternooners.”

I have made my three trays which are to house my specimens, but (disaster!) have run out of green silk.  I bought it in the bargain basement of Misan in Berwick Street, which has the bonus of being very cheap, but the downside that I may not find exactly the same fabric next time I go back.  If I can’t get the same fabric I may have to take a stylistic decision about the dividers in my trays; perhaps do them in stone coloured silk to represent walls.  I can’t help but feel that a total contrast would be better than an approximate match.

On the up side, I have completed my pineapples, and housed them in their glass bottle succession houses.  Here’s how I did it:

I covered three oval wooden beads in buttonhole stitch, using two strands of stranded cotton in slightly different shades of a ‘pineapple-y’ colour (I used a chopstick to hold the bead steady).  I then used the ends of my cottons to stitch on some little seed beads. I then took lengths of cake wire, bent them in half and wrapped them in green cotton, in a sort of woven picot, and pushed the wires down through the hole in the bead.  I then cut some lengths of cotton ribbon and glued them to the protruding ends of the wires, and cut them to the desired length.  I did consider trying to couch them on, but decided that glue was better for my own sanity.  I then pushed the completed pineapple through the neck of the jar, and prodded it into place with a chopstick (who knew they were so useful in embroidery?!).

I have made a start on my first flower to sit in my flower garden tray – the “Rose of Monday” (Rosa Mundi).  Next task: to decide on my other specimens…

Happy New Year to everyone!  I hope you have all had a lovely festive period.  In the weeks leading up to Christmas I managed to make the main body of my box lining.  I found that the most challenging part was getting my measurements totally accurate, so that the lining (essentially a box in its own right) would fit perfectly and snugly into my slightly wonky wooden case.  I’m pretty pleased with the result.

First I made the ‘succession house’ side sections.  I cut four long thin pieces of card, padded them with felt, then laced them side by side into one piece of green silk.  Then I folded them into place and slip stitched them together to form a rectangular tube.  I covered the square(ish) base piece with my green striped fabric, slotted it into the bottom of the tube, and slip stitched it into place.  Once I’d made all three, I slip stitched them together; then, using the same method, I made a large main section which will house my ‘garden trays.’  I think making the trays themselves will be a bit more challenging as I want them to have an interesting layout of compartments. Where’s the fun in making life easy for yourself?!

I have been thinking about how best to line my box and create sections and dividers within it.  After talking to my tutors at the Royal School of Needlework, I have concluded that I need to understand the whole art of box making, to which end I have bought ‘Embroidered Boxes’ by Jane Lemon (Batsford) and studied it closely.  I made a test panel to line the lid of my box and covered it with some lovely green striped fabric from Carole at Coward Interiors in Hertford.  However, the main body of the box is going to be a far more complicated prospect!  I have decided to make three sections down one side to accommodate my glass bottle succession houses, and one large section which will house three trays; a vegetable garden; a flower garden; and an arboretum.

After looking about for old bottles, and failing (inevitably) to find exactly what I was looking for, I chanced upon some modern ones in Clock and Cards in Ware.  The benefits of these are that three fit beautifully down the side of my box, and they have nice wide necks for me to get the pineapples into.

The pineapples (very fashionable, and introduced by John Radcliffe) are going to be made of oval wooden beads covered in buttonhole stitch and seed beads, with wired woven picots coming out of the top for leaves.

For my arboretum I was rather taken with the idea of vintage botanical book plate illustrations, showing twig, leaf, flower and fruit.

I have been doing some more research about travelling cases, and was delighted to find a really beautiful one in Honey Lane Antiques in Hertford.  It was a mahogany Victorian ladies case, so not exactly what I want to make, but it gave me a very good idea of what the interior might look like.  I’m going to go back and ask if I could take a picture.

I’ve trawled ebay and bought myself a box (not Georgian – they cost rather a lot of money, but it’s old and I like the shape, size and style) and am now looking around antiques and bric-a-brac shops for old square glass bottles – I’m envisaging them as greenhouses.

I’ve also been giving some thought to what I would like to line it with.  On the same page of the inventory as the travelling case was a listing for “23 Yards of green striped Carpet for the Great Stairs” and I thought it might be nice to use something to represent this.  I wanted to know exactly what sort of carpet that would have been, and found a very interesting paper online about 18th Century carpets (“The floorcloth and other floor coverings in the London Domestic Interior 1700-1800” by S. Sarin – the link was on www.buildingconservation.com).  Who’d have thought that there was so much to say about carpets?!  Based on this I think it probably would have been a Venetian carpet, which has a fairly coarse and robust weave, but no pile, so that’s my starting point for lining.

Next I need to look into how to make dividers for my box.

Plenty to do and find out about before I even get to the point of deciding which plants to put in it and how I’m going to make them!

I’ve been so inspired after our first ‘Threads of Time 2’ meeting – and am delighted to be involved!  The small section of the Delme Radcliffe archive which I have seen so far threw up plenty of gems to kick-start the creative process.

I was particularly taken with the description in the household accounts of 1772 of “a small Mahogany travelling Case with 2 square cut Glass bottles & stoppers, & 3 Ivory boxes, lock and key.”

This got me thinking about how what we take away with us when we travel says a lot about who we are.  I always take my crochet, a book, my crossword and sudoku puzzles, plenty of pens and a lip balm, which pretty much tells you all you need to know about me!

This case would probably have been the property of John Radcliffe, and would have been a bit of a status symbol (see www.antiquebox.org/history-of-dressing-cases-and-vanity-boxes/ for an interesting article about travelling cases).  So what was important to him?  Well, one thing was certainly his garden, into which, the records tell us, he poured money, time and design expertise.

So I have decided that I want to make a travelling case of my own, containing boxes of stumpwork specimens from John Radcliffe’s garden.