You are here: Home>Herts history>People>African & Caribbean people in Herts before 1830>Ayuba Suleiman Diallo 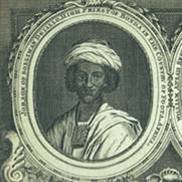 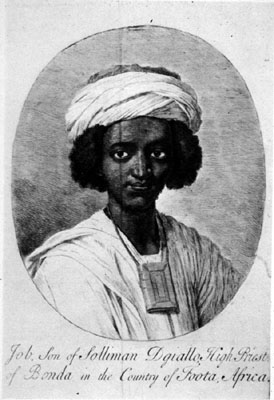 The son of a Muslim slave trader in the Gambia, Ayuba Suleiman Diallo (known in England as Job ben Solomon) was himself captured on a slave-selling expedition in 1731 and sold to an English captain.   Ayuba was sold to a tobacco planter in Maryland, but ran away, was captured and thrown into prison. It was here that he attracted the notice of Thomas Bluett, a Merchant from Cheshunt, who used another slave as an interpreter to find out more about his story.

Discovering that he could write, Ayuba was allowed to send a letter to his father in Africa. It was entrusted to a Captain who was sailing for London, where it came into the hands of the Director of the Royal African Company, James Oglethorpe. Oglethorpe was so impressed with the letter and its story that he engaged Mr Hunt, the rich Liverpool merchant who owned the ship that had first captured Ayuba, to buy him back and bring him to England.  Thomas Bluett accompanied him on the journey on board the William, arriving in London in April 1733 to find that Oglethorpe had already left for America.

A lodging was found for Ayuba in Limehouse, where Thomas Bluett visited him, and found him extremely unhappy and fearful as Mr Hunt was considering selling him to recoup his costs. Hunt agreed that Bluett could take Ayuba to his own home in Cheshunt and promised not to sell him without letting him know.

Evidence suggests that Thomas Bluett was probably the tenant of one of four exclusive residences built during the early 18th century, on the Theobalds estate.  Here Ayuba leant to read and write English, and became extremely popular among the local gentry. He was tall, handsome and well-educated, and thrilled them with stories of his adventures and descriptions of life in Africa. They showered him with gifts and talked of setting up a subscription to buy his freedom from Mr Hunt.

The night before Thomas Bluett set out with Ayuba to return to London, Samuel Holden, a tenant of the Duke of Portland’s on the Theobalds Park estate, wrote a letter to Sir Byby Lake, the deputy governor of the Royal African Company, acquainting them with the case, and asking for their help.

As a result, a subscription was raised to pay Mr Hunt the £40 it had cost him to buy Ayuba, £20 for travel and accommodation, and money to cover Thomas Bluett’s bills for the time Ayuba had stayed at Cheshunt.  In July 1734, Ayuba returned home to Africa as an employee of the Royal African Company. In the same year, Thomas Bluett published his account of the whole adventure:  ‘Some Memoirs of the Life of Job, the son of Solomon, the High Priest of Boonda, in Africa, by Thomas Bluett, Gent, who was intimately acquainted with him in America and came over to England with him’.   The book was dedicated to the Duke of Montague, who was probably Bluett’s landlord, as he was Lord of the Manor of Theobalds, in Cheshunt (1709-36).