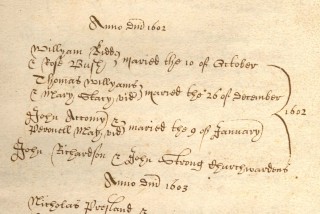 John Accomy was one of the earliest black people to live in Hertfordshire. He was described as a ‘Moor’, and may have been brought here as a slave. We first find him in the East Hertfordshire Muster Roll of 1596 as ‘Accame the negro’, among the servants of Mr Henry Capell. We do not know how old he was at that time, but three years later on 17 Jun 1599, he appears in the baptism register of Little Hadham as John Accomy.

He married Peronell May a Hertfordshire widow in January 1602,the marriage lasting until 1613 when Peronell died. John was married again to Constance Swain at St Andrew’s church,Hertford in 1614. The couple had 2 sons, Giles and John and a daughter, Elizabeth, all of whom were baptised in All Saints church, Hertford.

In 1631 he was obviously integrated into the community because, along with several other inhabitants of Hertford, he was charged with allowing his daughter Penelope, possibly the daughter of his first maariage, to be idly at home instead of apprenticing her to a trade. His son Giles, however, was living in Brickendon ready to be apprenticed. John died in 1638 and was buried at All Saints church Hertford.