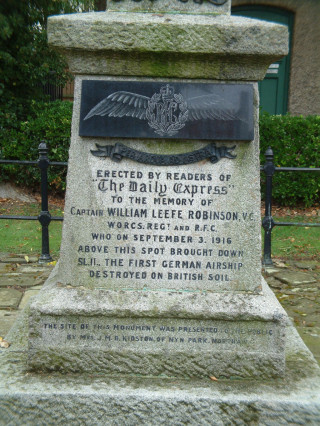 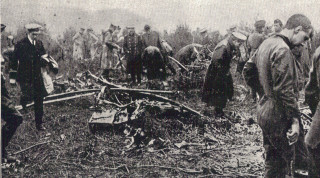 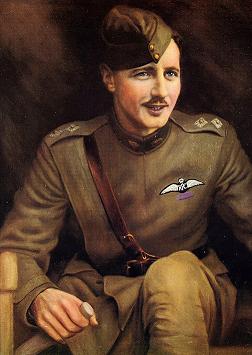 In 1916, one of the most dramatic air-battles of the First World War ended in a field in Cuffley.

Though less devastating than the Blitz of the 1940s, the German Zeppelins and other airships terrorised south-east England with their bombing raids, and were widely believed by the public to be unstoppable.

The Night of the Attack

On the night of 2nd/3rd September 1916, a fleet of sixteen airships embarked on the biggest raid so far.  Among the pilots scrambled to counter this was Lieutenant William Leefe Robinson, originally with the Worcestershire Regiment, but now fighting with the Royal Flying Corps, soon to become the Royal Air Force.

Flying an obsolete B.E.2c, Lieutenant Robinson encountered a Schütte-Lanz airship, the SL 11, over north London and engaged it in a David and Goliath encounter.  Attacking from beneath, Robinson strafed the ship with machine-gun fire.  The SL 11 burst into flames and crashed in a field behind the Plough Inn, Cuffley, killing all sixteen men on board.

The Effect on Public Morale

Robinson’s actions, which earned him the VC, had an enormous effect on public morale, demonstrating graphically that the mighty German airships could be destroyed by a determined pilot in a tiny, rickety plane.

Unfortunately, Lieutenant Robinson didn’t live long to enjoy his fame.  Shot down in April 1917 by a German squadron led by Manfred von Richthofen, the ‘Red Baron’, he spent the rest of the war in a prisoner-of-war camp, despite numerous attempts to escape.  Following his release, he died of Spanish Flu.

A monument was erected to him in Cuffley, close to the site of the crash.