Lists of all those liable to serve 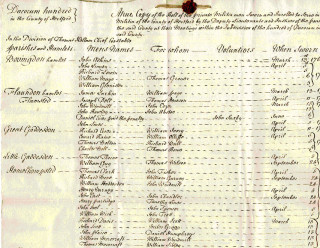 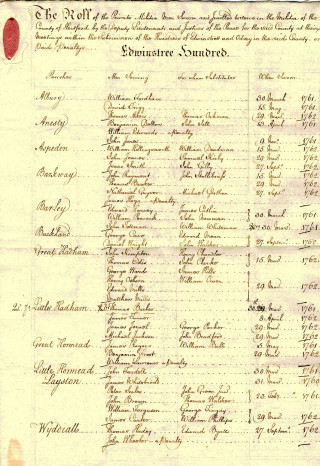 Roll of private Militia men sworn and enrolled in Edwinstree Hundred 1760-62 to serve in the militia. This is the final list after balloting, on which the names of substitutes are entered and for whom each substitute served.
Hertfordshire Archives and Local Studies, Ref: QS/MIL/9/11 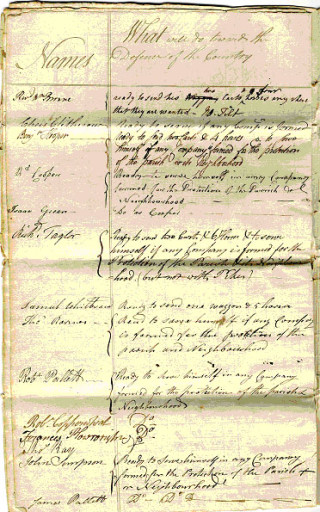 'Posse comitatus' list for Essendon 1798 - a schedule of what the parish would do for defence against the French, compiled by the constable. It includes names of those willing to serve, amounts of stock and offers of horses and carts
Hertfordshire Archives and Local Studies, Ref: DP/37/10/2 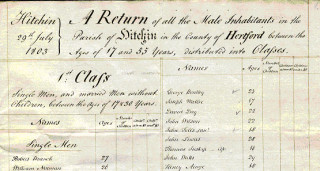 Detail from 'Levee en Masse' - a return of male inhabitants between the ages of 17 and 55, Hitchin, 1803
Hertfordshire Archives and Local Studies, Ref: 66987 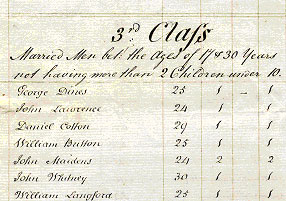 Another detail from the above document
Hertfordshire Archives and Local Studies, Ref: 66987

After the Civil War and subsequent restoration of the monarchy the militia was in abeyance. A small standing army was created in 1685 by the state, and in times of foreign conflict this was reinforced from the local militia. In 1757, with increasing overseas commitments and following the outbreak of the Seven Years War, the system was revived and formalised by passing the Militia Act of 1757, which established county-based forces in England and Wales.

Militia lists are parish returns of those men between the ages of 18 and 50 (reduced to 45 in 1762) liable to serve in the county militia. They are, in effect, a census of nearly the whole of the local adult male population and are a unique source for discovering where in the county a family was located. They can be very informative, giving details about individual men, their occupations, infirmities and family circumstances. Hertfordshire is fortunate in having an extensive, though not complete, series of militia ballot lists.

The parish constable sent the returns to the clerk of the court of Quarter Sessions, where balloting took place to decide who should serve in the militia. Men served initially for three years, later extended to five years, and were not called upon to serve overseas, although they might be sent anywhere in Britain or Ireland.

If a man was chosen but unwilling to serve, it was possible to find and pay a substitute to serve in his place and also to appeal against inclusion. Exemptions were granted to those who had already served, were infirm or had a large number of dependants who would otherwise be a burden on the poor rates. Peers, clergymen, teachers, magistrates, apprentices, members of the regular forces, seamen and constables were automatically exempt but may still be listed.

After 1757 returns were made intermittently. In Hertfordshire they survive for the following years: 1758-65; 1768-69; 1772-73; 1775; 1778; 1780-87; 1792-94; 1796-98; 1801. Most parishes have returns for the years 1758-1780, while fewer have surviving records for the period after 1780. Returns for 1803-04 are contained in a militia book covering Hertford and Braughing hundreds. An alphabetical list of parishes, including dates of surviving militia lists, can be found in the Quarter Sessions catalogue at HALS. Indexed transcripts of the lists by parish have been published by the Hertfordshire Family History Society and the full series is available at HALS in the Local Studies Library.

Related records held at HALS include:

Associated militia records can be found at The National Archives, including the County Regimental Returns for the Militia 1781-1876; the Supplementary Militia 1799-1814 and the Local Militia, East Midland and Western 1808-16.

This form of enforced conscription proved very unpopular and increasing opposition from the civilian population led to the Militia ballot being suspended in 1829. From then on the Militia raised its recruits through voluntary enlistment and the force was more closely linked with the regular army. This culminated with its conversion into a Special Reserve just before the First World War.