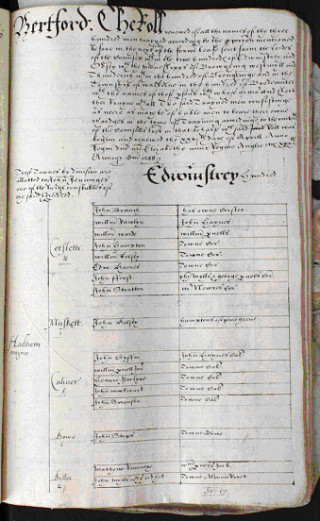 Page from the muster book for the Hundred of Edwinstree, showing men available in Much Hadham 1588
Hertfordshire Archives and Local Studies Ref: 6990 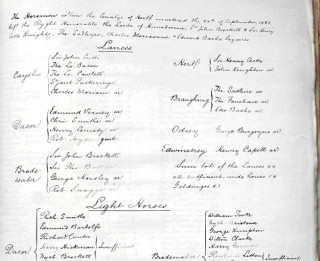 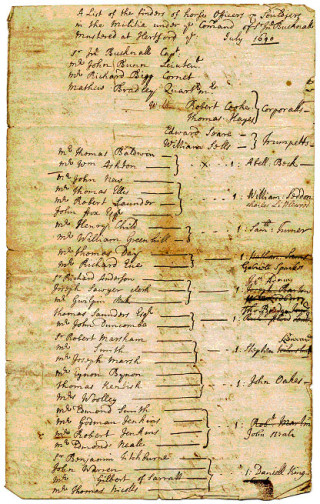 List of finders of horse, officers and soldiers in the militia under the command of Sir John Bucknall, mustered at Hertford, 1690
Hertfordshire Archives and Local Studies Ref: 79902 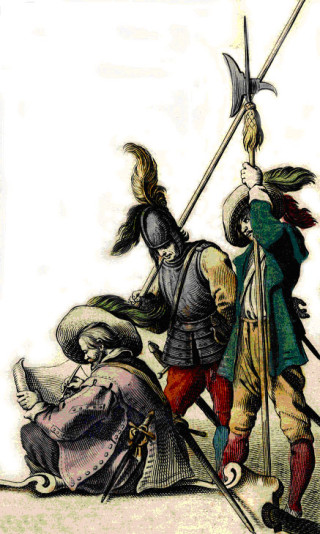 Detail from a map of Hertfordshire, published in 1645, showing soldiers from the Civil War period
Hertfordshire Archives and Local Studies Ref: CM10

From medieval times until the English Civil War in the mid 17th century there was no standing army. Troops were raised, as the need arose, from the adult male population who were called annually to muster for the local militia. Militias were part-time, voluntary, civilian forces of able-bodied men aged 16 to 60 which were organised by county. Muster rolls, which are name lists of men called to serve in the militia, were commissioned by Local Commissioners or the Lord Lieutenant of the county, assisted by local officials such as the parish constable, to count the men and arms that were available.

Not a complete census

They can be valuable sources for family historians as they list the names of local inhabitants who were liable to military service, and the equipment they were required to have. However they do not represent a complete census of the male population – those who were unfit or too poor to provide the necessary equipment (and who might not be trusted to use their weapons in defence of property) may be omitted altogether. The minimum requirement under the 1557 act was for those holding land worth £5 to provide one bow, one bill, one sheaf of arrows and one steel cap. The returns may list able-bodied men ‘without harnesse’.

Whilst a few muster rolls survive locally, the majority are held at TNA amongst the State Papers Domestic, the Exchequer Accounts and the Audit Office Accounts, or at the British Library. The records shown here have survived amongst deposited private collections or parish records and are held at HALS.

Related records held at HALS include: