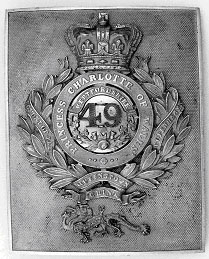 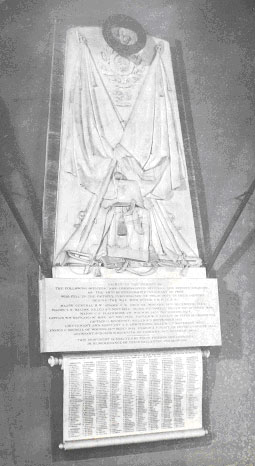 Monument to the officers and men of the 49th who fell in the Crimean war. It was destroyed by fire in All Saints Church, Hertford, 1891
Hertfordshire Archives and Local Studies. Ref: DE/Yo/1/52

The other army regiment with a Hertfordshire connection was the 49th (Hertfordshire) Regiment of Foot, raised in 1744 and linked with the county in 1782. In 1816 it became known as Princess Charlotte of Wales’s Own, and in 1881 was redesignated the 1st Battalion Princess Charlotte of Wales’s (Berkshire) Regiment. The regimental museum of the Royal Berkshire Regiment is at Salisbury, Wiltshire https://www.thewardrobe.org.uk/.

For those ancestors who were enlisted as regular soldiers, records may be found at The National Archives. It is important to know whether they were officers or ordinary soldiers and sailors as the records are very different. If this is not known the published Army and Navy lists which list all officers can be checked (see below). If the name doesn’t appear, consult records about non-commissioned officers and men. Officers were predominantly from the landed gentry and other ranks came from the poorer classes of society. Other ranks includes privates in the Infantry, troopers in the Cavalry, trumpeters, drummers, gunners and sappers who were serving under corporals and sergeants, who were non-commissioned officers.

It is also useful to have an idea of the army regiment or corps a man served with, or in the case of the navy, which ship. A regiment normally consisted of one or two battalions, with one based in Britain for training and recruiting while the other was stationed overseas. Traditionally other ranks enlisted for 21 years but this was cut to six years in the 1870s in an attempt to attract more recruits.

Officer records held at TNA include

Records for other ranks include: