A slave rebellion in Haiti 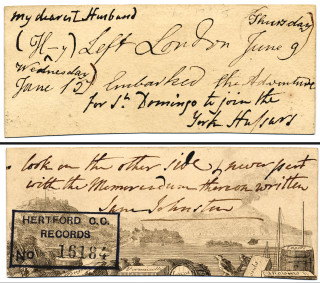 During the 1790’s there was a massive slave rebellion in Haiti (then known as St Domingo) led by a former slave, Toussaint L’Ouverture. One Hertfordshire man, Henry Johnston, who had joined the York Hussars as a way of escaping personal debts, was part of the British force sent to put down the rebellion.

A bundle of letters

The letters he wrote to his wife while he was on campaign are kept at Hertfordshire Archives and Local Studies. She preserved them carefully, writing on the back of one card: ‘look on the other side & never part with the Memorandum thereon written, Jane Johnston’. On the other side of the card it is recorded that Henry Johnston departed on the ‘Adventure to St Domingo’ on 15th June 1796.

Johnston was one of 20,000 reinforcements sent to St Domingo to gain control of the island and stop the resistance spreading to other islands.  His regiment was sent to Jamaica after St Domingo was evacuated. He describes vividly the conditions he found there. Within 10 days more than 90 men had been lost, mostly through illness. Altogether 89,000 British soldiers were sent to the West Indies; 45,000 of these died, nearly half of them on their journey to or from the islands.