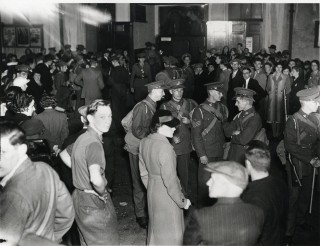 The picture shows the scene outside Clarendon Road Drill Hall in Watford as the two Territorial anti-aircraft batteries based at the drill mobilise to join the anti-aircraft defences on the evening of 24th August 1939. From the hart badges on their collars and gun badges on their caps the soldiers in the foreground can be identified as belonging to 79th (Hertfordshire Yeomanry) Anti-Aircraft Regiment, Royal Artillery. After some three years service in Anti-Aircraft command in England and Wales, the regiment saw service in North Africa and Italy.