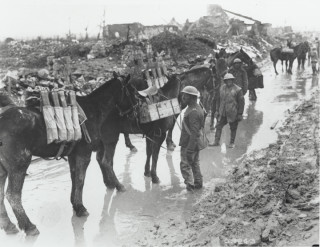 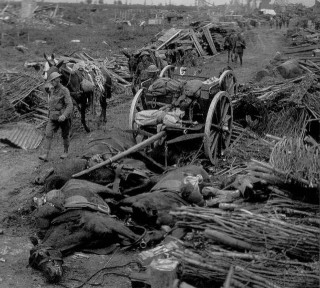 Horses killed in action on the Western Front 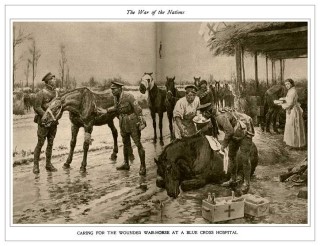 Horses being cared for by the Blue Cross

When war began in 1914 the British army possessed a mere 25,000 horses. The War Office was given the urgent task of sourcing half a million more to go into battle. They were essential to pull heavy guns, to transport weapons and supplies, to carry the wounded and dying to hospital and to mount cavalry charges. In the first year of war the countryside was emptied of shire horses and riding ponies, a heartbreaking prospect for farming families who saw their finest and most beloved horses requisitioned by the government.

The demand for horses to support the war effort had an immediate impact on agricultural within England and Hertfordshire.

For the families who lost them, and the grooms, infantrymen and cavalrymen who took charge of them and helped train them up it was a traumatic change. Transported to the ports, they were hoisted onto ships crossing the Channel before being initiated into the horrors of the front line either as beasts of burden or as cavalry horses.

The tragic fate that befell most of the horses was not lost on the British public, who petitioned the government to improve animal welfare during the war. The RSPCA and the Royal Army Veterinary Corps were both active in treating injured horses and trying to prevent unnecessary suffering. But the horses were so vulnerable to artillery and machine gun fire, and to harsh winter conditions in the front line, that the losses remained appallingly high. Indeed, the loss of horses greatly exceeds the loss of human life in the terrible battles of the Somme and Passchendaele.

However, through all the suffering and heartbreak, the close relationship between the men and their horses shone through. They did their best to care for them in the most testing and tragic conditions. Some men became as close to their horses as to their fellow soldiers and their loss was felt as deeply. All had their own names, personalities and histories, never to be forgotten.

At the end of the war some of the surviving horses were sold as meat to Belgian butchers, being regarded as unfit for any other purpose. But for the few that returned home there was a joyous welcome and reunion. It would be the last time the horse would be used on a mass scale in modern warfare.

THE IMPACT OF AGRICULTURAL DEPRESSION

AND LAND OWNERSHIP CHANGE ON THE