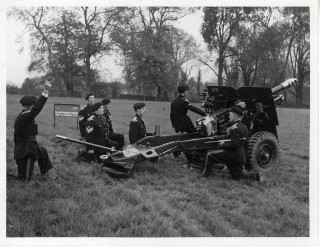 As a Territorial Army unit, the Hertfordshire Yeomanry traced its origins to the raising of mounted troops in the county in response to the threat of invasion by Napoleonic France in the 1790’s. The St Albans Battery had been mobilised when war began in September 1939 and took part in the Normandy Landings on 6th June 1944, afterwards fighting through France, Belgium, Holland and Germany until VE Day in May 1945.
The picture shows a 25pdr. Gun of St Albans Battery, 286th (Hertfordshire Yeomanry) Field Regiment, Royal Artillery about to fire the minute gun at the start of the two minutes silence at St Albans on Remembrance Sunday, 1958.