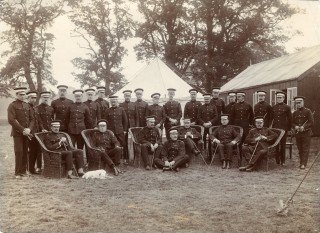 Officers at the annual camp 1912
By J.D. Sainsbury

First raised in 1794, the Hertfordshire Yeomanry had existed continuously in the county since 1830 and had become a mounted regiment of the Territorial Force under Lord Haldane’s reforms, in 1908.  In the picture, the officers of the Hertfordshire Yeomanry, Territorial Force, are at the regiment’s annual camp at Broxbourne in 1912. They are wearing their ‘undress’ blue uniform, which was worn for some parades and in the mess for less formal evenings. Seated at the front are (left to right): Major P. Cazenove,  Major S.G. Sheppard, Lt-Colonel Abel H. Smith, Major H.M. Kersey (on ground), Colonel the Earl of Essex, Major G.R. Smith-Bosanquet and Major E.B. Sheppard.