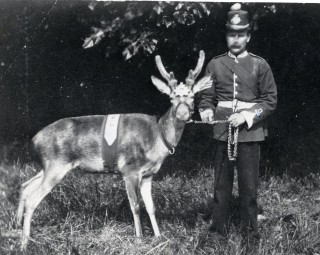 Raised under the Militia act, 1757, the Hertfordshire Militia had a continuous existence in the county from 1758 to 1920.Initially raised by ballot from the ‘Militia Lists’, the force was recognised on a voluntary basis with the ballot in reserve in 1852. Recruits did their two months’ initial training at the depot of the 16th foot (the Bedfordshire Regiment) at Kempston, Bedford and were then liable for a period of training with the unit every year. Later redesignated as the 4th Battalion the Bedfordshire Regiment, the Hertfordshire militia saw service in South Africa, 1900-02 and in France and Flanders, 1916-18.