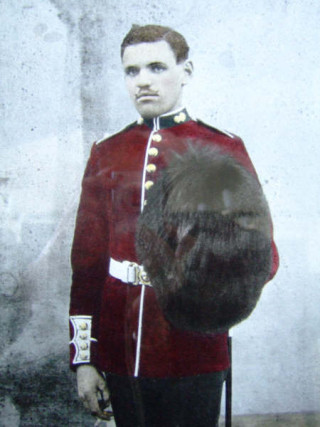 Edward Barber was born in Tring in 1893 and was the son of a lamp lighter.

He began his working life as a bricklayer’s labourer, enlisting in the army in October 1911.  After three years of service Barber was due to be transferred to the reserve and was considering leaving to join the police but the outbreak of war put paid to any career change.  Barber stood 6 feet 2 inches tall and was described as ‘a man of buoyant spirits, an iron will, reckless to a degree, and absolutely without fear.’

Barber won his VC at the battle of Neuve Chapelle on 12th March 1915.  He ran ahead of his grenade company throwing bombs at the enemy.  Many of them surrendered and by the time the grenade party caught up with Barber they found him alone, surrounded by surrendered Germans.  Barber was officially reported missing on 14th March.

His body was found by Lance Corporal Fuller from the same company.  Fuller found a letter in Barber’s pocket addressed to a cousin living at Slough.  Fuller wrote to the cousin explaining, ‘while doing his duty he was picked off by a German sniper.  The bullet penetrated his brain, death being instantaneous… Your cousin feared nothing and he was the finest man we had, both in wit and courage.’  Barber’s body was never recovered and in February 1916 he was officially classified as dead.  His mother told a London journalist, ‘Of course, we are very proud, but I can’t bear to loose my boy.  What is the Victoria Cross to the loss of my son?’

In 1965 Barber’s Walk in Tring was named in his honour and a portrait of Barber hangs in Tring council offices.