Wood engraver, cartographer and Fellow of the Royal Geographical Society 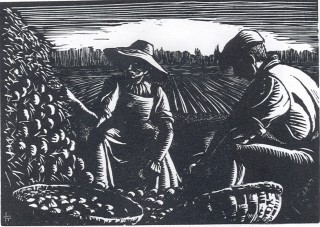 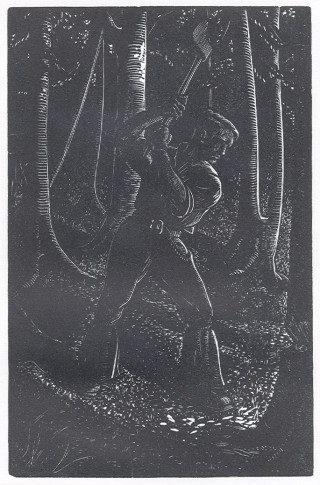 Dorothy Haigh is a name that may be very familiar to people associated with Heronsgate in Rickmansworth. However despite a distinguished career in several fields, including having an island in Antarctica named after her, she seems to be relatively unknown.
I first came across her when I admired a wood engraving on a friend’s wall some years ago and was told it was one of Auntie Dot’s. I was lucky enough to be given one or two pieces of her work later, which made me dig a little further and I discovered just what an interesting life she lived.

Dorothy Haigh was born on the 27th March 1905 in Heronsgate a former Chartist settlement in Rickmansworth. When she was five she moved to ‘Woodway’, the house she was to live in for the rest of her life. Sometime In the late 1930’s she attended the Central School of Art in London and was taught wood engraving by Noel Rooke, who was responsible for the revival of the art of wood engraving in Britain during the early twentieth century. Other better known pupils of his are Clare Leighton and Robert Giddings.

Until 1939, Dorothy lived at home looking after her parents; but once war was declared she joined the Land Army and worked  locally. However her artistic skills were discovered and she was recruited as a cartographer for the Foreign Office. Elizabeth Cull wrote in Dorothy’s obituary for Herts Countryside:

“One can only guess at her wartime experiences there; mystery shrouds the work of the map maker when a country is at war, but Dorothy did well enough to be asked to stay on when the war ended and became the Head of the Foreign Office’s map making department”. It was while she was doing this work that she became “closely associated with the Scott Polar Research Institute, Cambridge and in recognition of this Haigh Island in Antarctica was named after her and she was elected a Fellow of the Royal Geographic Society”.

While in the post Head of Map Making after the war, Dorothy commuted daily to London. In addition to full time work she looked after her Father and continued with her wood engraving. She became a Member of the Society of Wood Engravers and her picture, alternatively called ‘Beekeeper’, ‘Beekeeping’ or ‘Combing the Hives’, featured as number 44 in the Society of Wood Engravers retrospective 50th exhibition in the 1980’s. Her work generally shows local rural scenes or animals. She seems to have a particular soft spot for cats and at the time of her death it was suggested people give donations to the RSPCA in her memory.

Dorothy also researched the history of the Chartist Land Company in her lunch breaks and much of the information formed the basis for A M Hadfield’s book about Heronsgate. This book, and the more recent book by Ian Foster, use some of Dorothy’s drawings. The Foster book also recalls people’s memories of Dorothy and her role in the community, including the memorial book she made for the church.

Dorothy Haigh died on Christmas Eve 1988 at the age of 83. Sadly I never met her, but someone who started out as someone’s Auntie Dot turned out to have had a very distinguished career in several fields and was one of those unsung women who contributed greatly to local and national history. Like many such women she still seems very elusive and I’d like to find out more about her, her art, whether other people have enjoyed it or if they knew her in her lifetime.

On a separate page is a list of her engravings and if anyone could add images of these it would be lovely to see them so her work becomes better known. Her Central  School contemporaries’ work can be seen on the VADS website vads.ac.uk/collections/CSM.html under the print collection heading. Sadly none of Dorothy Haigh’s works features, although it is easily their equal